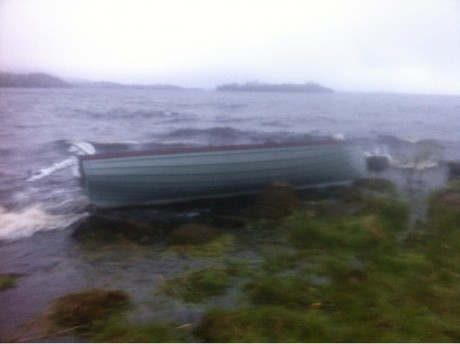 The boat stuck among rocks

A GROUP of six Swiss tourists got more than they bargained for after a trip to the county – finding themselves in the midst of a water rescue mission.

Police responded to a call for help after a Lisbellaw fisherman got into difficulty in a 17ft rowing boat in the Camagh Bay area, at Lower Lough Erne last Monday.

The engine failed – and his boat was trapped among rocks on the Belleek side of Inishmacsaint Island.

Police arrived and found conditions to be difficult. As Constable Gavin Huey explained to the Fermanagh Herald – the intervention of a group of Swiss tourists was vital in getting the boat back to shore.

“It was very windy – the water level was higher than normal and he misjudged the depth and hit his engine. The shear pin went on the outboard. He’s a local man, a regular fisherman, but the elements caught him out and he got washed up on the rocks on the Belleek side of Inishmacsaint Island.”

Constable Huey said that waves were up on two metres, according to the RNLI – high for this time of the year.

While the police didn’t possess enough manpower to remove the boat, a group of Swiss tourists were on hand to provide aid.

“The Swiss tourists were in two hire boats and they were moored at the jetty on the sheltered part of Inishmacsaint,” Constable Huey explained, “We spoke to them, one was an Irish-Swiss fella – a very nice fella and he asked his friends to come along.

“They were full of Irish whiskey and bravado – and they gave us the power we needed to get the boat out and onto land.”

He added: “It was great – it’s a very remote place. Only for them we would really have been able to do it.”