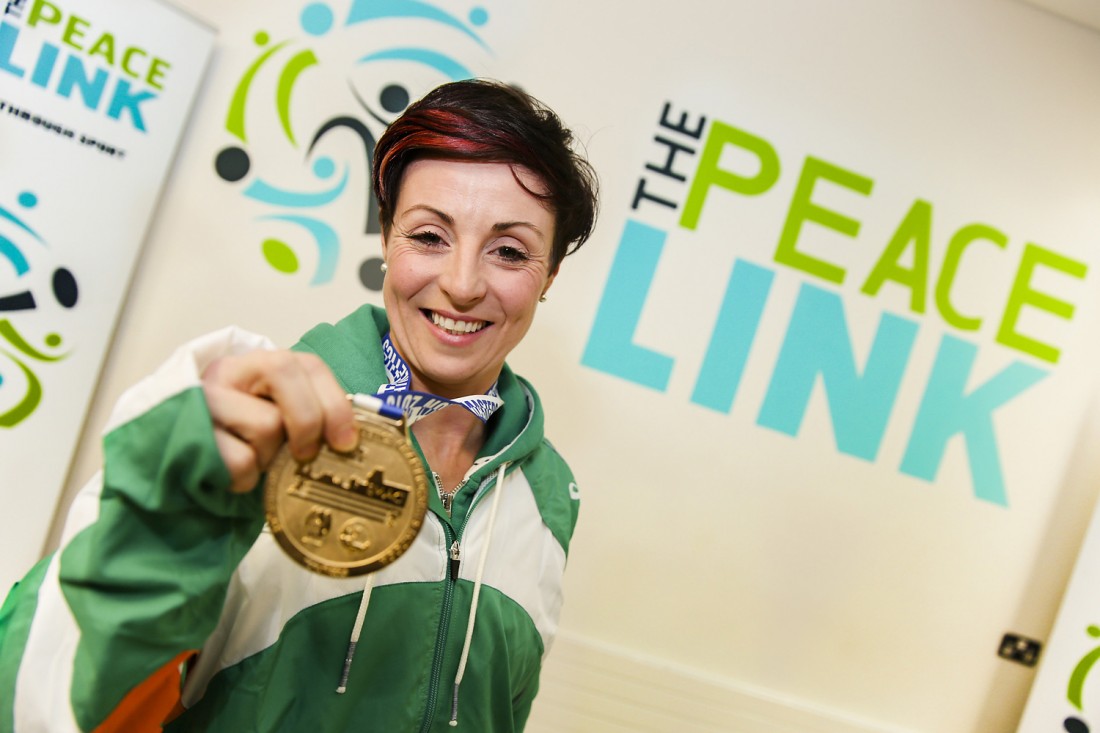 March was certainly a month to remember for Denise Toner. She laid down a marker early in the month winning gold in the 800m and 1,500m at the National Masters Championships in the Athlone International Indoor Arena.

But she was about to things to a whole new level.

On March 26th she captured European gold in the women’s 800 metre 35-40 category at Torun in Poland. She delivered a dominant race in the final and had a full second to spare over Latvia’s Anna Titova in second place.

The Knocks runner produced her best indoor display of the season to burn off the opposition as she powered to the finish from early out.

“I tucked in behind Titova for the first lap and a half and then with 500 to go I took the lead,” said Toner. “I thought I’d just go for it because I knew she’d a strong sprint finish. I broke and got a couple of metres on her half way round the second lap and I held that. I didn’t want to leave it until the last lap. I’d been working on my kick finish, but I really wanted to push it from early on in the race.”
Indeed Toner’s time of 2:15.73 saw her cut the best part of a second off the Irish record of 2:16.10. It was heroic stuff, and fittingly she got a heroes’ welcome.

“The welcome back was unreal, it was unbelievable,” said Toner. “It took a few weeks to settle back in, but I’m back in training now and I’m heading for Lyon in August. I’ve my flights and all booked so I just have to get the training in now.”

The Lyon in question is the small matter of the World Master Championships, the very pinnacle of the sport. It’s might be an intimating prospect for some, but Toner is approaching it in the same relaxed manner than saw her stride to European gold.

“To be honest I don’t know much about it at all, Paul [O’Neill, Toner’s running coach] says I’m not a million miles away in terms of time, but I would need to cut a couple of seconds off my personal best from last year, but it’s not beyond my capabilities so it’s just a case of pushing it to see how far I can go.

“I try not to over-think these things before I go because otherwise I get nervous, I’m just going to take it as it comes and see what happens. As long as I know I’ve done my training I can go with a bit of confidence.”

With the decision taken to bid for world glory, the pattern for the next few months is clear for Toner. And it’s all aimed at Lyon.

“It’ll between 400s, working up to 3,000s, but it’ll be the 800m that will be the focus. I’ve got the NI Masters and the Irish Masters, different IMC events, there’s one coming up at the end of the month at the Mary Peters track. I’ll take in the odd road race just to get miles in the legs, but definitely the focus will be mostly on the track.

“It’s a challenge, it’s totally different because I would always have been on the road and this is a totally new experience for me.”
One of the great assets Toner has to draw on is a committed and comprehensive back room team.

“I’d be completely snookered without my husband [Philip],” said Toner. “He’s been absolutely brilliant. We’re a bit of a tag team. He comes in from work and then I go out. Then when I come back in from training he heads out to do a bit.

“Then I’ve Paul O’Neill for the running end of things and Cathal Beacom for the strength and conditioning, Marty McGourty, Elaine Mohan and James Mullarkey doing physio too, there’s a right band of them there to help.

“There’s a great club there in Clones. The fellas running there are great, they pace you during training sessions. Sometimes they would hold back to push on myself and some of the other ladies. You definitely couldn’t do this if you were trying it on your own, it would be difficult keeping the motivation going,” said Toner.