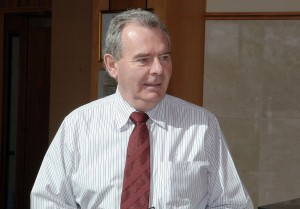 BACK IN COURT… Sean Quinn

AFTER what appeared to be an upturn in the fortunes of Sean Quinn and his family, with the recent ‘return’ of part of his empire in Derrylin / Teemore / Ballyconnell to local ownership, and his role as consultant, things took a dramatic turn for the worse last week.

Until then, negotiations had been going on between Mr Quinn and a team of liquidators for IBRC, the new name for Anglo Irish Bank to resolve issues between them.

On the one hand, IBRC was suing the Quinns for some €500m allegedly owed to the bank for undeclared assets abroad, hotels and commercial buildings, etc.

On the other, the Quinns were taking the bank to court for allegedly illegal loans amounting to €2.3billion. The family are claiming that the money was advanced to them as shares to prop up the bank at a time when its share price was dropping fast.

Had those talks been resolved, each side would have dropped its legal action against the other, leaving the bank to sell off those assets it had managed to secure.

However, a recent row over the sale of an IT company by IBRC led to the Dublin government’s finance minister asking those same special liquidators to carry out an investigation.

Unfortunately for both parties, the Quinn/IBRC issue became caught up in this latest row and, suddenly, the talks were stalled, at first and then, it appears, taken off the table.

This was confirmed on Sunday on RTE Radio by a junior minister at the Department of Finance, Simon Harris.

He told the interviewer that the talks had collapsed and that it was likely the matter would be settled by the courts.

Unless, something equally dramatic happens, Mr Quinn will be back in court in Dublin on 6th June for a case that, according to the ‘Irish Times’ is ‘likely to last six months and potentially spill into next year’.

While it is not known what influence was brought on to the Quinn/IBRC talks by the Dublin government, there remains a strong suspicion that their perceived ‘anti Quinn’ attitude was at work.

Similarly, columnists in some of the southern media have been scathing at the very idea that Mr Quinn could escape scot free, if a deal was struck.

For all that, the pending legal action is set to incur massive legal bills on either side.