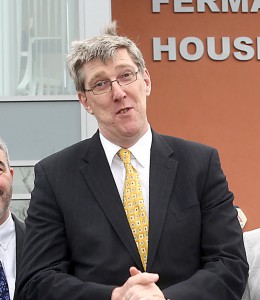 By Gareth McKeown
IN ITS FIRST official decision the Interim Board of Governors of the new Portora and Collegiate amalgamated school has written to the Education Minister asking that the date of amalgamation be deferred to September 2016.

At the landmark first  meeting of the new board, held on April 22 in the Killyhevlin Hotel plans were put in motion to move towards the new school, including a newsletter to be distributed to all staff and pupils of both schools.

The creation of the board follows on from Education Minister John O’Dowd’s decision to approve Development Proposals 260, 261 and 262 for the amalgamation of Portora and Collegiate and the establishment of a new co-educational 11 – 18 non-denominational voluntary school in Enniskillen.

At the meeting the first decision made was to write to the Minister for Education, pictured right, to request that the date of the amalgamation ‘be deferred to 1 September 2016, or as soon as possible thereafter’.  This request has been forwarded to the Minister for consideration. The new school is set to come into effect on 1 September, 2015.

The  Fermanagh Protestant Board of Education, who are the Trustees of the newly amalgamated school also sought six nominations, from the respective Board of Governors of Collegiate and Portora .

A statement from the Interim Board of Governors released to the Herald confirmed further work to be undertaken.

“The Co-chairs, along with the other members of the board, will appoint a principal designate, establish staffing structures, put in place the operational arrangements for an amalgamation and, most importantly, ensure suitable curricular provision for all pupils.

“The IBOG is aware that communication with staff, pupils, parents and the wider community is vital to ensure openness and transparency and so it will be issuing a Newsletter for distribution to all staff and pupils and also making it available on the websites of both schools.

“Over the next 16 months, the IBOG will be working to progress the amalgamation and will continually provide updates to all stakeholders on the strategic decisions being undertaken.”