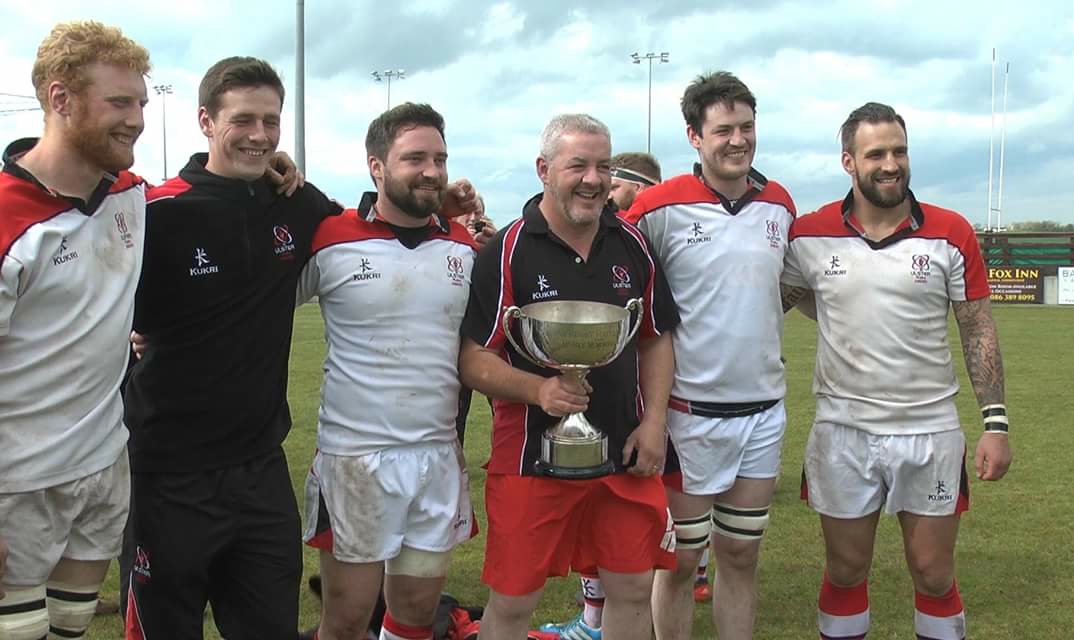 A grand slam is a fine way to end a long wait for a Junior Interprovincial title and Ulster completed the job on Saturday with an impressive 20-6 victory over title holders Leinster at Ashbourne.

Saturday saw Ulster lift the title after a ten year following a tight fought win against Connacht 20-12 two weeks ago and a great performance against Munster last weekend in Carrickfergus with a 35-0 victory.

Fermanagh had a strong representation on the team with Enniskillen’s out half Nicky Finlay and back row Jamie Johnston, Clogher Valley’s second rows David Sharkey, Eugene McKenna and hooker Kyle Cobaine involved with the squad throughout the series. Fermanagh exile James Carleton, currently plying his trade with Portadown, was also part of the playing squad.

Ulster forwards coach Davy Black from Clogher Valley passed on his knowledge to a pack that dominated at every opportunity. Training commenced back in February for the Ulster squad with over 60 players attending the sessions and trials. The training continued with two sessions a week in Portadown leading up to final squad being selected for the Interprovincial series.

The Leinster game proved to be the toughest battle of all for the Ulster lads. It was a match played at a high pace with open rugby from both teams. Ulster were slow to start and fell behind to an early penalty from the Leinster winger. Eventually Ulster began to get into their pattern of play, establish field position and work a great score from their full back after 20 minutes.

Just before half time the Ulster team out-muscled the opposition with tight drives around the fringes before their number eight bullied his way over for a 14-3 lead.

Leinster pulled back a penalty shortly after the break before Finlay restored the margin of advantage with a well taken drop goal. A further penalty from Ulster concluded the scoring in a closely fought second half and secured the title for Ulster.

A great way to finish a long season with players and coach now able to enjoy a well-deserved rest.
Enniskillen Captain Jamie Johnston in his third year of selection for Ulster Juniors was delighted with the experience.

“What really amazed me was how well the boys came together, it is difficult sometimes to create a cohesive team environment in just four weeks. This year we had a brilliant group of lads who really bought into the process, our coaches were outstanding this year as well. It was a very enjoyable month and one that I feel very fortunate to have been involved with,” said Johnston.

Forwards coach Davy Black was also thrilled with the Interprovincial success, the first for Ulster since 2004.

“We were lucky this year in how quickly the guys started to gel and build that sense of togetherness. I think that was the biggest difference to unsuccessful sides from previous years who also had some incredibly talented individuals,” said Black.

“Obviously the influence from the west of the province was really satisfying for me. Nick Finlay made a big impact throughout, particularly in marshalling the defence while Jamie Johnston probably single-handedly turned the Connacht game with a great performance. James [Carleton] was a very consistent performer and a key ball carrier along with [David] Sharkey who really showed his experience and was a  calming influence amongst the boys throughout despite missing one game with injury.

“Kyle [Cobaine] and Eugene [McKenna] brought strength in depth to the squad in their first year of involvement. Eugene played a great half against Munster and while Kyle didn’t get any interpro game time I think the experience at this high level will really benefit them as players in the future. Altogether it’s great to see so much local involvement in such a big achievement.”