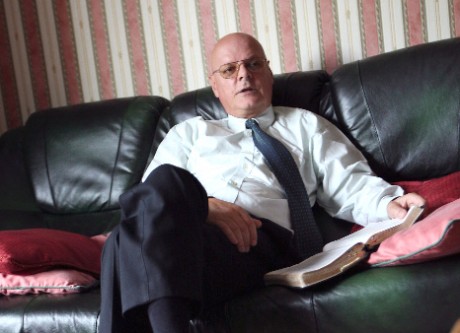 Speaking after 62 per cent of people in the  South voted in favour of changing the constitution to allow gay and lesbian couple to marry, the former minister of Kilskeery Free Presbyterian Church went on to brand it as a “false religion” which has “cursed” Ireland.

In a statement sent to the Fermanagh Herald, the fundamentalist accused the South of defying God and “embracing sodomy”.

“This has been done in defiance of God’s Word. That, of course, is hardly surprising since the people of the land have been under the heel of Romanism for centuries and have thereby been taught to pay scant heed to what the Bible says, irrespective of the allegiance to the Word of God that the Church of Rome professes.

“Romanism is a false religion which masquerades as the religion of the Lord Jesus Christ. It has indoctrinated the Irish people in its falsehoods for centuries. What a curse its dark shadow has been to Ireland.

“But Ireland has not only had to bear the burden of false doctrine instigated by Rome, but the Irish people have been plagued by the licentious vileness of her ‘bachelor’ priests, many of whom used their position to molest and violate hundreds of children within this generation and countless multitudes in the centuries of her past dominance.

“In reaction to that and as a direct result of it, the majority in the Irish Republic have supported the legalising of sodomite marriage.”

Referring to a picture of Sinn Fein leader Gerry Adams celebrating the yes vote with Ireland’s best known drag queen who is called Panti Bliss, he said: “The painted ‘female’ in the middle is Rory O’Neill, who performs as a ‘drag queen’.

“There you have it. The man who heads up Sinn Fein, the armed wing of which mounted a 30 year terror campaign in Northern Ireland, which resulted in hundreds of people, both Roman Catholic and Protestant, murdered and in thousands terrorised, robbed, injured, kidnapped and taken away and murdered and secretly buried, is at the heart of this “yes” vote.

“What an unholy caucus”

He appealed for prayer for the “Bible-believing minority” who he said would feel more isolated by the South’s decision to vote in favour of same-sex marriage.

He added: “Pray that many saddened, alarmed and troubled souls will seek out God’s Word and those who preach it and embrace the Truth of God in these evil times.”

Rev Ivan Foster is set to preach on the result of the Irish referendum at Kilskeery Free Presbyterian Church this Sunday, 31, at 7pm.