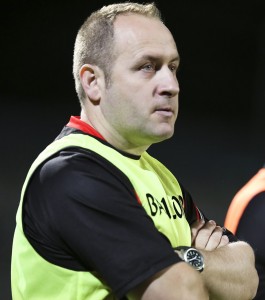 A final flourish from Antrim gave the Saffrons the win in this closely fought Ulster minor championship quarter final. But Fermanagh were well in contention for much of the contest and could have progressed had luck perhaps smiled upon the Erne men.

Antrim were first off the mark with Odhran Eastwood clipping over from close range after a minute. Luke Ryder missed a free attempt shortly after, but he landed a clinker after six minutes to level things up.

It got better again for the hosts shortly after. With nine minutes gone Luke Ryder launched the ball in and with Paul Óg Reilly in causing a nuisance, Gavin Murray lost the ball and it went back across the line for the game’s first goal.

Antrim didn’t panic though and two Conor Small frees cut the deficit to the minimum as the match moved into the second quarter.

While the Saffrons passed up two decent goal chances, Fermanagh’s eye for goal was undimmed and after 21 minutes Paul Óg Reilly turned Gavin Murray’s kick out, off loaded and was there to receive pass before rifling a precision shot low to the keeper’s left.

Antrim heads dropped a little and Fermanagh made profit, Conor Goodwin popping over from close range and Luke Ryder adding a free to put two goals between the sides.

Jack Kelly was in fine form between the Erne posts and had to do well to deal with a dangerous dropping shot. Then seconds later pulled off an outstanding save from Conor Small.

Nevertheless, Antrim’s finally got the goal they had been threatening two minutes before the break. A long ball came in to the danger zone and Brendan Corr and Jack Kelly both spurned personal safety to come and meet it. It was Corr who had the better of the collision though, his flick guiding the ball to the Fermanagh net.

That left Fermanagh leading 2-3 to 1-3 at half time and a intriguing second half in prospect.

Again it was Antrim who opened the scoring in the second half, Conor Small knocking over a free from the left wing. However Luke Ryder answered immediately with a monster free from out on the cinema side of the ground.

Ben Rices eased over a lovely score from the outside of the right boot, before Ryder was again on the mark, with two frees within a minutes to give Fermanagh a four point cushion with eight minutes of the half gone.

Then Conor Small really decided to turn on the style. He landed three frees in a five minute spell, using both feet to trim the margin to the minimum.

Luke Ryder slotted a much needed free, but it was Antrim who were in the ascendancy.

Conor Small levelled it up with two frees as the game moved into the last ten minutes.

Then came a hammer blow for Fermanagh.

A fine point from Eoghan Curran had edged the hosts back in front, but a brilliant Antrim moves found Kevin Small and he slammed home to put the Saffron’s into a two point lead.

Then Joe Maskey won Jack Kelly’s kick out and fed Odhran Eastwood to pop over.

Fermanagh managed to muster a pointed free from Peter Leonard a minute into added time, but it proved a case of too little, too late.