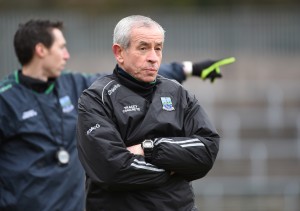 Fermanagh have booked their place in the Ulster semi-final, but not before weathering a dogged challenge from a determined 14 man Antrim  outfit, a late Sean Quigley penalty putting a handsome complexion on the final scoreline.

The opening stages of the game were very cagey, but the first score was worth the wait. After three minutes Tomás Corrigan sold a lovely dummy and landed a handsome effort from the right wing.

Two minutes later Ryan Jones collected possession around the middle and one twoed with Ciaran Flaherty before pointing.

Antrim got off the mark seconds later Ryan Murray pumping over a quality score.

Fermanagh then had a couple of good goal chances, Marty O’Brien and Paul McCusker passing up good opportunities to shake the net

The 12th minute saw another rapid exchange of scores. First Kieran McGourty picked up a high dropping sideline ball and slotted his shot to level the game. Then Ciaran Flaherty answered instantly as Fermanagh raked back up the field.

As the game edged into the second quarter Ryan Jones made it double scores with a trademark long range beauty.

The middle of the half saw three important substitutions made. First injury saw Ruairí Corrigan replaced by Daniel Kille, then four minutes later CJ McGourty was introduced for a quiet Mickey Pollock. A short while later Ryan McCluskey was replaced by Aidan Breen after previously shipping a heavy challenge from Pollock.

CJ McGourty wasn’t on the pitch long before registering his first score of the game from a close range placed ball. That the first scoring action in over ten minutes

Antrim were proving dogged opponents and it was only towards the end of the half that Fermanagh started to get to real grips with them. They were assisted by Sean McVeigh getting the line after foolishly lashing back with an elbow near the dugouts

Not long after that Sean Quigley pointed a free. It should have been more though, Tomas Corrigan was pulled down in the penalty area, but Maurice Deegan was some distance from the foul and awarded only a free

After that score Sean Quigley won the kick out and fed who Barry Mulrone who floated over a sumptuous score. That left two in it at the break, Fermanagh 0-6  Antrim 0-4.

Antrim may have been a man down, but it was the Saffrons who opened the second half scoring, CJ McGourty delivering the goods with a 35 metre free in front of the posts.

That cut the gap to the minimum, but that was as close as Antrim were to get as Fermanagh slowly, but surely edged away.

Sean Quigley sent over his second free of the game after 42 minutes from the right wing, 35 metres out. Then Ryan Jones, really playing a captain’s part, put a goal in it again with a divine long range point which went over off the upright. Two minutes later it was Sean Quigley with an exquisite free from a tricky angle out on the left wing.

However Antrim did muster a bit of a rally in the middle of the half. It was sparked with a CJ McGourty free 26 minutes from time. He added a second a minute later, both of those frees brought forward for dissent from Fermanagh defenders.

Barry Mulrone then curled over a superb point from play. Not just a quality score, but one Fermanagh needed at the time.

With 11 minutes left to play Fermanagh coughed up another cheap free which CJ McGourty duly converted to put two minutes in it.

The Erne men responded well though. First there was a majestic point from Daniel Kille. That was swiftly followed by a superb effort from Paul McCusker to give Fermanagh a two score cushion with time running out.

The closing period of the game belonged to Sean Quigley. He registered two frees before Fermanagh won themselves the spot kick they had been unjustly denied in the first half. Daniel Kille was fouled going through on goal and Quigley delivered the coup de grace with a blast to Chris Kerr’s right.

A fine win for the Erne men and now a mouth-watering semi-final tie against Malachy O’Rourke’s Monaghan awaits.