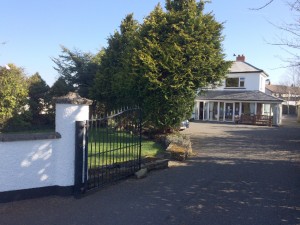 THE Erne North UUP councillor, Raymond Farrell, a mental health practitioner, has urged the families of residents in Creamery House Home in Kesh to lobby against its proposed closure.

He recalled how, back in 2011, the then Health Minister, Edwin Poots publicly declared he would never close a home again, after receiving a delegation who told him how talk of closure had upset residents.

Mr Farrell told the Herald: “There was quite a significant expression of concern from the families of the residents at the time. They need to be considered and that is why it is not a lost cause, but do need to make their views known to the consultation which is now out very shortly.”

Referring to last week’s ‘community meeting’ in Kesh, organised by the trade union, Unison, he s aid he had found it very positive.

The Western Health and Social Services Trust, in proposing its closure, say it is not economically viable to maintain and, instead, it will seek to relocate the residents in alternative accommodation.

However, Councillor Farrell has argued that this would be unfair on the residents.

“They see this as their home, literally, and they have become accustomed to the facilities there, to the local management and staff and to the local community.”
Trust statement

The Western Trust in a statement, said the facility been operating with a number of vacancies and at a financial loss for some time.

It added: “In addition, there are a number of environmental issues associated with the building and the home is therefore no longer conducive to the needs of the current residents and staff.”

It said it had been working in partnership with its owners, Helm Housing Association, on these issues.

The statement went on: “As a result of these factors, the Trust is currently proposing to relocate the current residents to more appropriate accommodation to meet their assessed needs.

“A number of options will be available to residents, including supported living, residential provision and, if necessary, nursing home provision in the local area or a move closer to their families.”

It said it will be engaging with the residents, their families and staff to ensure the relocation of residents is taken forward ‘in an effective and sensitive manner’.
It said the proposal to close and relocate was one of a number of proposals included in the Western Trust’s 2015/16 Savings Plan approved at a public Trust Board meeting last month.

The Trust will now take forward a consultation on the proposal during May/June 2015.