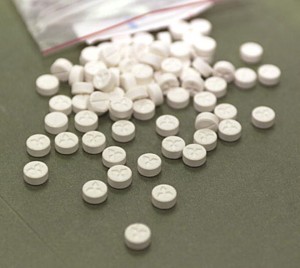 Sean O’Brien was found with 44 Ecstasy tablets in his possession.

AN Ulster University student walked free from court today (Monday) with a two-year suspended sentence for dealing in Ecstasy tablets.

Co-accused Dylan Quaile (20), of Main Street, Maguiresbridge, had pleaded guilty to attempted possession of the Class A drug Ecstasy and received a six month suspended sentence.

Sentencing had been deferred for six months by Judge Stephen Fowler QC to give the defendants an opportunity to stay out of trouble and desist in drug offending.

Simon Reid, prosecuting, told Omagh Crown Court, sitting in Belfast, that O’Brien got off a bus in Enniskillen on November 20, 2013 and met up with co-accused Quaile.

He said that local police had observed the pair who appeared to be “nervous” when they saw the officers sitting in a nearby patrol car and then ran off.

“Police commanded them to stop and they did,” said Mr Reid. “O’Brien was carrying a black safe box which was in his possession. He told police the key was at home but when officers searched him they found key the on him. The box was opened and a quantity of drugs were observed inside.

“This amounted to 31 grammes of cannabis, 44 Ecstasy tablets, a set of scales and deal bags. A total of £324 in cash was recovered from him which police say was the proceeds of the drugs.

“O’Brien’s home was searched and traces of cannabis were found along with money bags and a set of digital scales.”
The court heard plasterer Quaile admitted to police after his arrest that he was trying to buy drugs from O’Brien to “feed his drug habit”.

Defence barrister Conan Rae said O’Brien had made full admissions to police during interview after his arrest.
“He was a student at the Coleraine campus of the Ulster University in his second year of a business studies degree course. He was on a gap year at the time of this offending.”

Mr Rae added that following his detection, O’Brien had voluntarily attended with a drugs counsellor in Enniskillen.
The defence barrister said that last October, the court had deferred sentence for six months “to put his future in his own hands” and it set down a number of stipulations which included no further offending, desisting from all drug use and attending drug counselling sessions.

“I have spoken to the officer in charge of the case and he says the defendant has not come to further adverse attention of the police. In fact police intelligence states he is no longer dealing in drugs.

“Your Honour gave him a chance and in fairness to him he has grabbed it with both hands.

“He is a young man with a bright future and I would see no benefit in sending him to prison,” he added.

A defence solicitor for Quaile said he had now “kicked his drug habit” and had “desisted from further drug taking”.

“This is possibily a turning point in this man’s young life,” added the solicitor.

Judge Stephen Fowler QC told O’Brien that he should “consider himself extremely lucky at being given the chance to turn his life around”.

Saying that O’Brien had complied fully with the order of the court last October, the judge said the although the custody threshold had been reached, he was giving him a two-year sentence suspended suspended for three years.

“There is no doubt that this sentence will have a detrimental effect on his career and that’s the way it will be. That’s the price he will have to pay for this offending.”

Judge Fowler QC said Quaile had also complied with the court order by staying out of trouble and had remained drug. free He was sentenced him to six months in prison suspended for three years.

He said that if the defendants stayed out of trouble for the next three years “you will hear no more about this”.

However, the judge warned that if they were convicted of another offence which carried a term of imprisonment, the court would implement his two-year sentence on top of any other sentence imposed.

In conclusion, Judge Fowler QC told the pair: “Be warned – stay out of trouble.”