Advertisement
HomeHeadlineToo young to vote, but well able to put it up to the election candidates
Advertisement 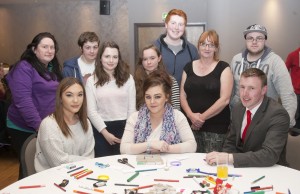 Under-18s won’t get a chance to choose our MP, but they were certainly up to the task of grilling the candidates, writes Gareth McKeown

YOUNG PEOPLE in Fermanagh had their say in the election race this past week as they put their questions directly to the main players.

At the ‘Let’s Talk’ election debate organised by charity Youth Action Northern Ireland at the Enniskillen Hotel candidates were quizzed on the issues most important to youth in the county.

The top table made up of Sinn Fein’s Michelle Gildernew, UUP candidate Tom Elliott, the SDLP’s John Coyle, the Green Party’s Tanya Jones and Northern Ireland Youth Parliament representative for Fermanagh South Tyrone Darragh O’Reilly were all tasked with answering the questions prepared by the students.

Transport
Concerns were raised by students regarding rural bus services not covering all areas of the county and a lack of transport provision for pupils staying after school to do work. UUP candidate Tom Elliott called transport a “huge issue”, but stated Translink was a private company that has to run on a commercial basis.  Sinn Fein’s Michelle Gildernew called the rural transport network a ‘disgrace’ and suggested subsidising the best used routes and using the profit to subsidise the lesser used routes. SDLP candidate John Coyle highlighted the issue of rural isolation while the Greens’ Tanya Jones stressed the need for a good transport system to ensure prosperity in the county. The biggest cheer came for youth representative Darragh O’Reilly whose calls for the return of the railways received almost unanimous backing from his young peers.

Legal Highs
The young students asked the candidates should all Head shops be closed. All candidates were in agreement regarding the dangers presented of legal highs. SDLP candidate John Coyle highlighted that even if the shops were closed these drugs were readily available online. Tom Elliott suggested banning all legal highs and stressed the need for new legislation. Michelle Gildernew highlighted the difficulty in making some drugs illegal and said education was paramount.

Education
Students raised the issue of reduced funding for further education colleges. Michelle Gildernew suggested utilising European funding like other countries, while Tom Elliott stressed the need for more cooperation between local business and further education colleges. John Coyle called on the MEPs to be more active in finding funding for colleges and universities in Ireland, while Tanya Jones said cutting funding in this sector was “short-sighted”.

Same sex marriage
Students highlighted how same-sex marriage is still not recognised is Northern Ireland, unlike other parts of the United Kingdom. Tom Elliott said the LGBT community was well accepted through society and did not see much hostility to gay people..
Michelle Gildernew said she was “bewildered” by Mr Elliott’s comments and claimed there was a high level of mental  ill health and alcohol use among the LGBT community. She claimed ‘gay bashing’ was still very much commonplace. John Coyle stated his and his party’s opposition to the conscience clause, and said when the issue reaches Stormont will vote against it. Tanya Jones said she was completely committed to equality, but said there was still ‘enormous stigma’, ‘discrimination’ and ‘suffering’ among gay people.

Politics
Amongst the young audience a poll taken indicated 75% would vote if the voting age was lowered to 16. All candidates said they were not against following the example of Scotland. Tanya Jones said the inclusion of 16 and 17 year olds in the vote would benefit everyone and would like to see it as soon as possible. As the youngest candidate John Coyle was also in favour of the move, while Tom Elliott said he had no major issue regarding the voting age and said he would like to see more young people take an interest in politics. Michelle Gildernew reiterated Sinn Fein policy that everyone should have the vote at 16.