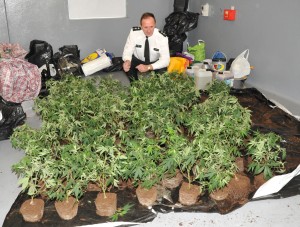 THREE VIETNAMESE MEN arrested near Lisnaskea with £43,000 worth of cannabis last year have appeared before a preliminary enquiry at Enniskillen Magistrates Court.

The three men were initially arrested after police stopped a van containing a  cannabis production unit on the Moorlough Road. The unit was discovered in the rear and it was reported cannabis with a street-value of £43,000 was uncovered.

The three who have been in police custody since the incident appeared in Enniskillen Magistrates Court. The prosecutor stated the three had cases to answer and no contrary submissions were made by the defence. District judge Nigel Broderick said he was satisfied there was a prima facie case against the three defendants.

When asked if they wished to say anything to the charges, give evidence themselves or call any witnesses on their behalf through an interpreter they replied: “No”. The accused were remanded into custody to return for trial at Dungannon Crown Court on May 28.