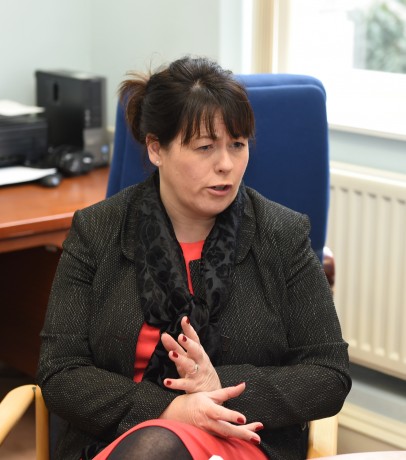 THE Sinn Fein MP For Fermanagh and South Tyrone has not ruled taking her Westminster seat in the future, claiming “never say never”.

Just weeks before she faces a battle to retain the most tightly-contested seat in the UK, Michelle Gildernew added the while the time and the circumstances are not right at the moment, she stands by her “never say never” response.

In an interview with the Fermanagh Herald, the Sinn Fein representative also said that the SDLP could have shown more consideration for their party candidate, John Coyle who has been subjected to a litany of online abuse following his appearance on the BBC NI show, The View.

The MP also believes she will gain from SDLP voters because they would “prefer to see her win” rather than unionist unity candidate Tom Elliott.

While it is Sinn Fein’s policy not to take their seats in Parliament, when asked if there were any circumstances in which she would take her seat, if she is to win, she said: “Well, I never say never but the time and circumstances are not right now and to be honest I don’t feel that the British have any need to involve themselves in Irish politics so why would I feel the need to involve myself in British politics.

She went on to condemn Twitter ‘trolls’ who targeted Mr Coyle after his first televised debate alongside her and Mr Elliott.

“I don’t think anyone should be getting abuse form any quarter but it does happen and we all have to take a certain amount of it. I would question political parties priorities when they put people into position that they may not be able for. The Alliance Party protected their candidate by saying that she wasn’t available and that was within their gift. I think the SDLP might have shown more consideration for John. I felt very sorry for him.

“I think in fairness to John, Fearghal McKinney was a very capable candidate in 2010 and he halved the SDLP vote so I think no matter who the candidate was people are voting with their heads and their hearts, and saying it’s Michelle Gildernew or a Tory candidate that we are electing. The fact that John is a candidate is neither here nor there, any SDLP candidate will find that SDLP voters will prefer to see myself elected than Tom Elliot and that’s across the board but also UUP voters and Alliance who also feel the same. That’s not a reflection of John.”

As election posters adorn lamp posts throughout the county, one billboard that was erected in the Ballinamallard area of the Sinn Fein MP has since been removed.

However, the mother-of-three said she is no longer surprised by these actions but “disappointed”.