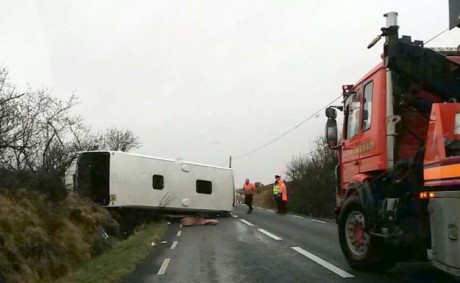 The scene of the crash on Saturday

LOCAL people who helped out at the scene of an accident in which a bus carrying 26 children overturned, have come in for high praise.

On Saturday after 2.50pm, just four miles outside Pettigo, a bus carrying an U14 rugby team overturned in a single vehicle accident.

Quick-thinking locals directed the coaches and children to the nearby Termon Complex in Pettigo where a community effort ensured that a crash that ‘could have been so much worse’ was overshadowed by the response by caring locals.

Nine children were taken to hospital as a result of the crash, while a coach sustained the most serious injury, a broken ankle.

“It was quite a scare but it was great to have the facility for them,” explained Natasha McGrath, community development officer at the complex.

“It would have been after lunchtime. My son came in and basically said: ‘Mummy there’s an ambulance with sirens blaring after going into the Termon Complex’. So as I say, I’m literally just down from it so we came running up.

“Even at that stage there were a lot of people on site and the local doctor for the area – we were able to give them a room. Obviously with the boys we had to check for injuries.”

Ms McGrath described the scene when she arrived: “Initially when we saw so many ambulances we thought ‘God is it a lot worse’ – and thankfully it ended up being OK.”

Nurse, Frances McGloin, from Belleek, was in the complex at the time, rehearsing for the upcoming pantomime. She told the Fermanagh Herald that no time was wasted in setting up an area for those injured and providing refreshments to those involved.

“What happened was somebody had ushered in the walking wounded from the bus crash. So a group of us set up an incident area and we segregated the different groups and took the more injured ones into our area and we summoned more help from the ambulance.

“It was very much a team approach, a community thing, and I can only compliment the Termon Centre. It’s a fabulous facility and what we were able to do, it was just commendable. The community really rallied round.”