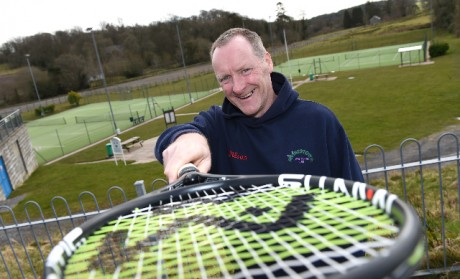 The strength of local tennis was recognised recently when John Maguire received a call up to the Irish colours. Maguire, a founder member of the Irvinestown Lawn Tennis Club in 1991, is understandably thrilled with the honour.

“For the likes of myself and Matthew McGann who was on the Irish team a few years ago it’s a great thing to help promote tennis in the west,” said Maguire. “Even to make an Ulster team is an achievement. To step up another level is a dream come through for me who has been in the game since I was eight years of age. It’s the pinnacle of my career and it’s an inspiration for the younger players coming through that the oul man in the club can achieve stuff. Kids can aspire to something like that.”

Maguire has being playing for Ulster at inter-provincial level for the past seven or eight years, so he’s an established face in the game nationally. But it was a knee operation at the end of last year, combined with hunger and desire, which helped take his game to the next level.

“In November I got a knee operation which allows me to play singles again,” said Maguire. “I’d too many football injuries over the years and I got keyhole surgery in both of the knees. At the turn of the year I worked hard, got myself fit again, lost over a stone of weight and my knees were going well.

“I played the Irish indoors in February and in the singles round I beat the competition’s number two seed, number three in Ireland. I was winning the semi-final, a set up, but then I hurt my knee cap, so I was a bit curtailed in that and got caught. But it was my victory over Mark Milligan that got me selection. He’s an Ulster man, but he’s based in Scotland and he’s on the Irish team nearly every year.”

Maguire will be travelling to Bolton at the end April for a four nations competition in Bolton over the May Bank Holiday weekend.

“I could be playing either singles or double in any of the three matches, it’ll be up to the team captain to call the shot on each match. It’s all new to me, but I’m playing the game long enough at this stage to know the ropes.” said Maguire.

Tennis is a family affair for the Irvinestown man with his son Kyran Maguire a promising youth player. Right now though, Maguire senior is really enjoying his new lease.

“I like to get to the net a lot, but over the years I’ve gone further back. It’s all about staying fit and being able to move around the court with agility. This last two or three seasons I’ve been plagued with knee injuries and I suppose then your motivation goes and you don’t be as fit. But this year I’ve really worked hard for it and I’ve reaped the benefits. I always knew once I got the knees done if I worked hard I could come back,” said Maguire.