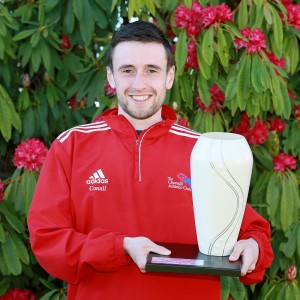 That’s progress was most marked in February when he tagged together a string of impressive jumps in top level competition.

Early in the month the Irvinestown jumper claimed the Irish universities triple jump title, before going on to set a new personal best the following day.
Then a fortnight later Mahon scooped triple jump bronze at senior Irish indoor championships with a jump of 14:08

“Winning titles is something I’ve never done before so it was a good feeling being on top of the podium,” said Mahon. “I’d missed quite a bit of training coming in to January so I was actually surprised by quite how good form I turned out to be in. It’s nearly positive when you can’t get as much training in as you might like, but there is still improvement.”

Last week saw Mahon underline his credentials at the Irish Universities Championships at the Mary Peters track. Competing in the colours of NUIG, the Fermanagh man romped to the Irish Universities outdoor title with a 14 metre jump in final round which saw him with 20cm to spare over his nearest rival, Shane Howard.

Interestingly Mahon also clinched senior bronze with the last of his six jumps, suggesting an athlete at ease with the pressure.

“I  think that’s something that’s coming with the experience and jumping so much in these competitions. When I first started I was very nervous. That’s one thing that’s changed this year, the mindset of thinking I actually can win instead of being very nervous,” said Mahon.

“It always takes me a couple of jumps to get into a competition anyway, technique wise, so it’s usually the last three jumps where I feel I come out the best. Plus you always have the biggest injection of adrenaline in the last round. It’s always the jump I enjoy the best, I always know I’m going to jump well in the last round. Maybe it’s the confidence I’ve developed.”

Taking the Irish universities title should see Mahon enjoy the privilege of representing Ireland at the universities championships between Ireland, Scotland and Wales at the end of May.

That competition will take place at the Mary Peters track and having already enjoyed success in that storied area, Mahon is looking forward the international experience.

The NUIG student acknowledges the formative role of St Michael’s in his career and guidance of his Donegal based coach David Doherty. However, with greater maturity, Mahon is taking greater control of his development, having more of a say in the training schedule and priorities.

With this being his last year competing at under 23 level, he is unambiguous about what his main target for the season; Success at the Irish under 23 championships at the end of June.

“It’s win or nothing for the under 23s. It’s all about the progression and this year I feel I’m in my best shape, but I just haven’t been able to get the jumping training in.

“Hopefully now if I get four or five weeks of consistent training I should be getting a big personal best.”