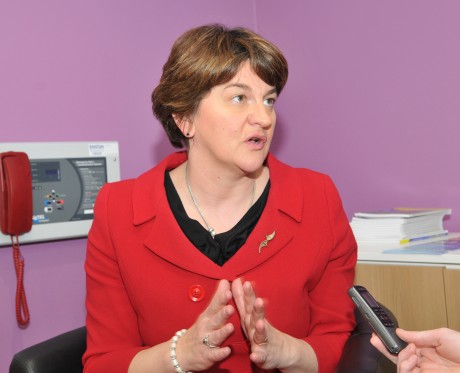 A director of the former Quinn consortium group has launched a scathing attack on Arlene Foster after she claimed investors were put off Fermanagh because of attacks on the former Quinn Group factories.

Comments made by the minister for Enterprise, Trade and Investment has sparked outrage from John McCartin, a Fine Gael councillor in Ballinamore, who branded her remarks as “bizarre”.

Mrs Foster said businesses were put off the county because of vandals who have targeted former Quinn Group companies and added that there was a “culture of secrecy” surrounding Fermanagh.
However, this has been denied by Mr McCartin who said that it’s odd for an investment minister to speak so “explicitly and derogatively” about her home county.

“I called her office this morning (Monday) and asked for clarification on those points but no one came back to me. I also called the PSNI to find out about the comments her husband.

“All I know is that the Guards say there are no acts of intimidation or violence, the owners of glass say the same as does the owners of the radiator plant, the owners of Quinn plastic and we have not experienced any.

There have been several attacks on properties once owned by Sean Quinn. A planned take-over of Aventas Roof Tiles by the Lagan Group fell through after its chairman Kevin Lagan received a death threat.

Comments made by Mrs Foster in a Sunday newspaper stated: “If you speak about what’s happening, what will be the consequences? People are afraid.

“I am trying to bring inward investment to Fermanagh but what company would want to base itself here, given what’s going on?

“Frankly, all anyone has to do is Google Fermanagh and they will see what’s going on. If you say anything, you end up being abused on Facebook. Look at the language they use to describe companies that are trying to secure jobs in the border region. They basically say, they want jobs as long as everyone is working for Sean Quinn.

“I would never take away from what Sean created but most people just want to get on with their lives.”

Mr McCartin went on to describe the relationship between the minister and QBRC as “pretty catastrophic” and he went on to question the potential investors.

“What potential investors and what attacks is she talking about. There have been no attacks in this year that I am aware of. Certainly since my involvement with QBRC.”

Brian Foster, Arlene’s husband who is a detective chief inspector for the local PSNI, told the newspaper that nine people had been arrested over the past three years in relation to the attacks.

He said: “We would appeal to the local community, who have been very supportive of police investigations to date. Lives, jobs and the quality of life within the area are being impacted upon but we are confident that with community support these matters are being addressed.”

The Fermanagh Herald contacted Arlene Foster for a comment, however she had not responded by the time of going to print.