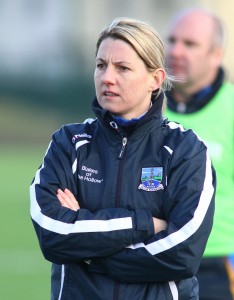 Manager Lisa Woods keeps an eye on proceedings against Tipperary.

Erne team manager Lisa Woods is hopeful that Sunday’s narrow one point victory over Tipperary will be the spur for a better second half to the league campaign.

Fermanagh have had a difficult openings sequence of games in NFL division three but have finally broken the ice with this slender success over the Munster visitors.

“I would be hopeful that this will be the impetus for us, and that in our next game which is at home to Longford we can build further,” said Woods.

A stiff breeze at the Bawnacre on Sunday had an influence on the pattern of the game, Tipperary having the benefit of it over the opening half.

“We played quite well against it and we reached half time in a good enough position being only two points down,” said Woods.

“But I thought the second half was very much stop-start and at the finish it was a lot closer than we would have liked.”

Fermanagh needed to nick the final two points of the contest to scrape through and the absence of pivotal forward Sharon Little was in the manager’s view, “A significant factor.”

But overall she was pleased with the sturdy performance put in by the team and singled out Tara Little who manned the centre back slot as, “Having an outstanding game.”

Two late points from Caroline Little and Lynne McFrederick gave Fermanagh their first victory in their 2015 NFL campaign, although it did take some post-match consultation with the referee to confirm the result.

Initially the man in charge had tallied it as a draw, but after a brisk dialogue with home officials the correct score was announced, Fermanagh edging through by the minimum margin.

The Erne side did just about enough to deserve the win, but they made hard enough work of it over the second half and came perilously close to being ambushed once again.

They played against the stiff breeze in the opening half, but produced some solid football to contain the opposition and they reached the interval just two points adrift. With the wind now to assist them on the turnover they were in a solid position, but over the next 30 minutes they found it hard to make headway.

They had quite a lot of attacking play, but a worrying number of chances were tossed wide and in the end it became a fraught finale, the game very finely balanced.

Next up for the team is another home tie, this one against Longford who are currently below the Erne side in the league table.

A victory over the Leinster team would go a long way to ensuring survival in the division. 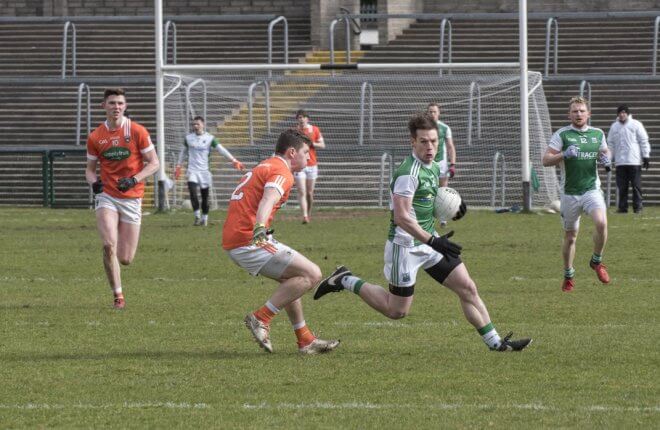 Stalemate with Armagh leaves it all to play for