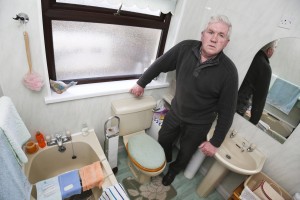 Brian Robertson in his own bathroom in which the smell emanates.

A SEWAGE problem has left residents in a Lisnaskea neighbourhood holding their noses.

At Mountview Drive in Lisnakea, behind the Ulster bank, an area mainly occupied by elderly residents, there have been problems with the sewage system, according to residents, for the past number of years. NI Water told the Fermanagh Herald that it is working to alleviate the problem.

The foul smell is affecting a number of homes in the area with the stench reportedly appearing as much as three or four days a week.

Brian Armstrong, who lives with his wife Emily at Mountview Drive, has been angered by the problem, and urged that the problem be sorted.

The 65-year-old has had dealings with NI Water, but said that the problem persists. It got so bad over the weekend that he had to take guests at his house outside.

“It’s an awful smell, the house is covered with it,” he explained, “It’s happening three or four days a week and there are two or three house affected by it.

“It’s been going on the last four or five years. We had people here on Sunday evening and we had to go outside because of it. It’s simply not good enough.”

SDLP Councillor Richie McPhillips has been involved in attempting to fix the problem with residents for the past twelve months.

“I’ve been on it twelve months, we’ve made several representations to them. Now they have come up to it and done remedial works – but it did not alleviate the problem.

“People have continuously had major problems with foul smells in their living rooms or their kitchens.

“Obviously there’s times of the year that it gets worse. The people have been at their wit’s end.

“They’re spending most of their time at home, so it does have an impact on their lives. I think it’s the weekend that it builds up and it builds up and if the sewage is lying there it creates the fumes and the smell.”

“The upstream sewerage system remains private and the responsibility of the developer and his successors and assignees,” the spokesman explained, “The responsibility for the sewers in the unadopted development has passed from the original developer to the current trustees.

“NI Water is currently in discussion with a building surveyor appointed by the trustees, in preparing a schedule of works necessary to bring the upstream development sewerage system to an adoptable standard.

“NI Water continues to work with the administrator and has appointed a building surveyor to move forward the adoption of the upstream sewerage system which should alleviate the smells and odours in the downstream sewers in Mountview Drive estate.”