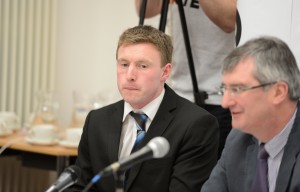 FOR A part of the world with among the highest electoral turnout record in all of Europe, what was surprising was just how few people –  twenty or so – turned out for a  Westminster election debate for 2015 at Fermanagh House in Enniskillen.

When you took away members of the media, organisers, the candidates themselves – and indeed fellow party members, elected and non-elected from the equation, it was a poor showing from Fermanagh voters.

While its likely that few decisions will have been made by voters following this debate, nor is it likely to affect voter turnout, it was perhaps telling of the present appetite for politics in the county.

The general consensus from those that I spoke to at the event – those who cared to turn-up – was that Fermanagh people were interested about the outcome – but not necessarily about the politics involved.

The event was streamed online, and while that is likely to have bolstered viewing numbers, if slightly, a low turn out is drastically at odds with the constituency that attracted 46,803 to the polls.

Smoothly run by RockTheVoteNI, it was, in principle the kind of event that should have attracted more.

The candidates were asked questions about education, health and fracking, and following each segment the floor – and Twitter users – were given a chance to pose questions.

For the candidates themselves, it was mostly routine. The two most experienced politicians on the panel, current MP, Sinn Fein’s Michelle Gildernew and the UUP’s Tom Elliott, took the event in their stride. The DUP have not nominated a candidate, with talks still ongoing between the two main unionist party leaders over a potential single unionist candidate.

Green Party candidate Tanya Jones was somewhat of a surprise package, and held her own sat between two heavyweights in local politics. From an SDLP perspective, candidate John Coyle will have to learn from the experience.