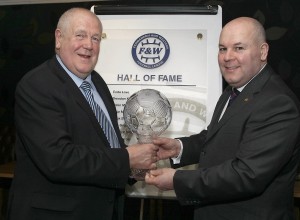 The great and good of the Fermanagh and Western gathered in the Killyhevlin on Friday evening for their annual Hall of Fame awards.

Four illustrious names from the annals of local soccer were inaugurated into the Hall of Fame. The ceremony proper was preceded by a moving video of the late Robin Mitchell which had been recorded for the 50th anniversary of the Lisnarick club.

The final inductee of the evening, Sammy McFrederick, was present with his family, friends and neighbours. McFrederick’s contribution to local soccer has spanned over half a century. His playing career was spent between the sticks for Larne, Ballymena and Derry City, but it was his contribution to Lisbellaw United which his perhaps his greatest legacy. He managed the side to five Mulhern cup titles and five Mercer leagues and then, on 12 May 1978 they became only the second local side to win the IFA Junior Cup. McFrederick was instrumental in the purchase of the home of Lisbellaw, Drumad, for £18,000.

Receiving his award, a beautiful Galway Crystal football, he joked, “I’m not going to hold it too long because I’m a goalkeeper and I’ve dropped too many in my time!”
McFrederick went on to say what an honour it was to received the award and share the company of other great names in the Hall of Fame. He recalled his own playing days, which started in 1958. McFrederick observed that in those days there were 10 clubs in the Fermanagh and Western and the growth of that to 32 clubs was an indication of the contribution the early trailblazers made.

“I was the luckiest sod ever,” said McFrederick, commenting on his playing and managerial career and the support he received from players, management and family.
“The great thing is to be able to say thank you. So many people have put so much into clubs in the Fermanagh and Western. When you go back to your clubs recognise those people who have contributed so much to this wonderful Association during very difficult times,” said McFrederick.

McFrederick’s presentation was followed by the unveiling of a new Hall of Fame honours board by Mary Keenan, Enda Love’s oldest daughter and Pete Keogh, brother of Brendan. The board will go on permanent display in the Bawnacre Centre.

Before McFrederick’s award, three other legends of the local game were also saluted. The first to be recognised was Harry Mercer, the man after whom the league cup is named. Chairman of the Fermanagh and Western Football Association Roy Cathcart, made the first of his thoroughly researched and well-presented citations.

Mercer’s principle claim to fame was being the first Fermanagh based footballer to be capped for Ireland. He was capped in 1908 against England in a match played before 22,000 at Solitude. Later when Corinthians became the first local side to win the IFA Junior cup in 1958 he was the guest of honour at the celebrations.

The next inductee was Joe Gillen. His playing career was spent in goal for Enniskillen Celtic, but it was as an administrator and organiser he really made his mark. He became club secretary in 1903, helping them to their best ever year in 1905. In 1906 he became chair of the Fermanagh and South Tyrone league until the first world war intervened. He died in 1939 at the age of 59, a wreath from the IFA on his coffin indicated the esteem felt for Gillen.

Billy Connor was the next inductee. He was chairman of Fermanagh and Western for 15 years and was secretary of Corinthians for their historic cup win in 1958. He helped found Cappagh Spurs women’s team, before emigrating to Queensland in 1974 where he set up the Gold Coast Women’s FA. Connor passed on in 1989 aged 81, and was buried in his IFA blazer and tie.