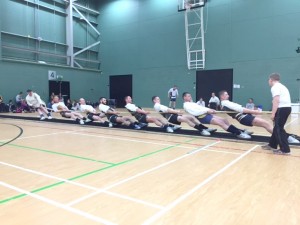 Country Club on their way to gold at the United Kingdom Indoor Tug Of War Championships in Glasgow.

The Country Club Tug Of War Team had an extremely testing weekend at the 2015 UK Indoor Championships at Glasgow.

As the team were in Scotland preparing to compete Nadine Hunter collected the award on behalf of the team.

See the main paper for full coverage of the Fermanagh Sports Awards.

Saturday saw the start of the 2015 UK Indoor Tug Of War Championships with the Country Club Tug of War Team competing on a number of fronts for both club and country.

The first competition of the day was the United Kingdom Closed 600 Kg Championships.

This was a well run and hard fought competition and the Country Club, pulling as the NI B team dominated throughout the complete weight class.

Although Scotland competed well and put everything into the final, the Country Club won in two straight ends.

The Country Club squad with the support of Ballyhegan entered three of the five senior men’s weight classes over next two days of competition and won all three, taking gold in the UK International Club 640kg; UK Open Club 640kg; and UK Open Club 580kg categories.

This was a truly dominant performance beating not only the best teams in the United Kingdom such as Kilroe, Raunds, Uppertown, Tinto, BRC and Richhill but also visiting teams from Holland and Ireland including TTV Monnickendam, TTV Lagerweij, and St Pats amongst others.