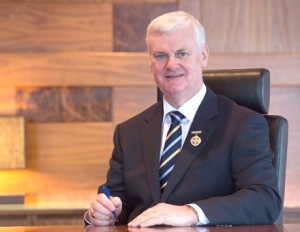 Aogan O Fearghail, who took office as GAA President at the Congress.

Judging by the tenor of some of the newspaper columns on the recent Congress held in nearby Cavan, the GAA’s annual decision making meeting was something of a soporific affair.

A swath of motions all given only cursory attention, a perfunctory proposing speech for the greater bulk of the proposals followed by a swift rejection by the assembled delegates.

So as far as the colour writers were concerned it was all a non event as they scrambled around looking for a peg to hang a column on.

The reality is that most Congresses are on similar lines. The vast majority of business to be dealt with, at least as far as the clár is concerned, is about basic housekeeping. Tidying up the nuts and bolts of the Official Guide can be compared to watching paint dry.

Essential business but it’s not going to set anyone’s pulse racing except perhaps if you are an anorak of such matters, Cork’s Frank Murphy springs to mind. Only once in a while does a really major issue grab the attention.

The debate on the ban, the opening up of Croke Park and more recently the proposals which dealt with the black card and other items connected with this coming from the FRC; These all generated lively argument.

An explanation for the lack of debate on the majority of the motions the weekend before last was that counties had diligently discussed these prior to their delegates heading to the Slieve Russell and they were simply there to press the correct button when it came to the vote.

And since most of the proposals were non contentious, those who were proposing them saw no great need to deliver impassioned speeches.

DG Pauric Duffy commented on the lack of engagement.

“They [Delegates] have been given a briefing, they know what they’re about, know what the change means and before they’ve come here, have discussed them and have decided, ‘we’re for this or against that.’”

One of the particular criticisms that emerged was the apparent lack of comment on Duffy’s annual report.

The DG himself was apparently nonplussed to see his analysis of GAA activity over the past year, receive scant response from the floor.

There had been the suggestion that the Sky deal might be the catalyst for a sharp discussion, but this didn’t materialise.

There is a similar scenario in our own county with the Secretary’s report to county convention nodded through with scarcely a comment.

Still Congress did have some matters to get its teeth into.

Not surprisingly the motions dealing with the games themselves attracted the keenest interest with a number of proposals from the hurling work group among those.

A mixed result here but apparently the hurling folk were generally happy enough with what got the nod and what didn’t.

In football there were a couple of proposals dealing with the hand pass which, had they been passed, would certainly have had an immediate and far ranging impact on how the game was played.

Restricting the hand pass and forcing the hapless goalkeeper to kick the ball if he received possession from a hand pass were both well beaten.

It would seem that for the moment at least there is no appetite for further tinkering with the playing rules so the issue is put to bed for the next five years.

Of more newsworthy note was the fate of the Leinster proposal that provinces be allowed to organise their championships as they see fit. This came very close to reaching the two thirds vote and judging by that it’s going to be back on the agenda again.

Change of some kind in the way the All-Ireland championship is run is a concept that is gaining momentum.