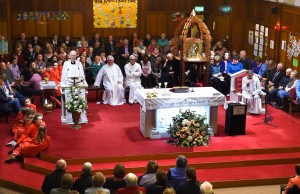 Archdeacon Cecil Pringle speaks to the large crowd in attendance at the Novena of Hope on Monday evening at the Graan. Also on the altar are Fr Niall Martin, Fr Daniel O’Leary and Fr Brian D’Arcy.

In addition to Fr Brian D’Arcy, CP, the rector, he was one of nine speakers over the nine days, drawing an estimated 1,000 crowd every time. Other speakers included GAA television pundit Joe Brolly.

Fr Brian, whose job it was to find the speakers (’you make about 30 phone calls to get the other eight’) admitted it was ‘a difficult thing to organise’.

As against that, he has 26 under his belt and has organised novenas in other places since 1978.

“The one thing in my favour is we have a good set of volunteers who are doing it.

It simply could not be done without them.

For instance, it takes about 30 people to man the car park alone, but as well as our own lovely staff, we had literally hundreds of volunteers.”

Asked about numbers, he quipped: “It was a complete disaster, nobody turned up”, but, turning serious, he said:

“It was a wonderful sign of hope which all the speakers remarked upon. The very fact of the atmosphere and the numbers turning up, they themselves received hope by coming here.

“In fact, Fr Daniel (O’Leary) who is almost 80 years of age and is an experienced speaker told me he never experienced an atmosphere like it anywhere.”

And, there was no shortage of ‘regulars’ at the Graan, people like Ally and Marian, Jackie and Louise and others, not forgetting Matt McGrenaghan (fiddle).
Music was an added bonus to the healing service last Wednesday (’it was just incredible, the turn-out’) where students from three local second-level schools, St Michael’s, St Fanchea’s and St Joseph’s helped out.

Even yesterday, Fr D’Arcy was ‘in a thinking mode’ as to who to invite for next year’s Novena.