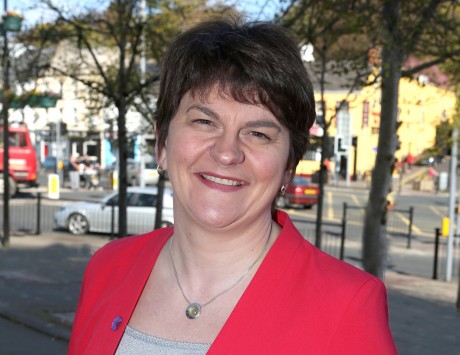 With the two main unionist parties gridlocked in talks over a single candidate, the MLA also said that she believes it is fair to expect voters to vote for unionism as a whole, over individual parties.

Speaking to the Fermanagh Herald this week, and with just under two months until the election, Ms Foster said that there are ‘still negotiations going on between the parties’.

She said that she doesn’t feel the people of Fermanagh and South Tyrone ‘have a voice’ at Westminster, referring to the abstentionism of current MP, Sinn Fein’s Michelle Gildernew.

“At the minute the whole west of the province apart from Foyle does not have a voice in the palace of Westminster and I really regret that because there is a need, particularly those of us who live on the periphery of the United Kingdom, to have a voice in Westminster to have our concerns raised,” she said.

“At present we don’t have that voice and I very much want to see somebody going back who is going to represent Fermanagh and South Tyrone in the palace of Westminster but also a unionist going back, obviously. I am a unionist, I want to see this constituency represented by somebody who believes in the union, and that transcends party politics.”

But is it fair to expect long-standing UUP voters to essentially vote DUP – or vice versa?

“I don’t think we take our voters for granted at all in that respect because in speaking to unionists in the constituency, what they want to see is representation in Westminster, they want to see a unionist returned – because they feel badly let down,” Ms Foster said.

“And they feel at the last election we were within four votes of having representation at Westminster and if more people had have come out and voted at that election then we would have been able to achieve that – so I absolutely believe that this is what the constituency and the constituency that votes for me wants us to do – have a unionist unity candidate.”

Asked then, if it becomes a vote for unionism over party politics, she responded:

“I think it becomes a vote for representation and a vote for unionism and I hope that when we come to the end of this process that people will have someone to vote for that they believe can represent, not just unionists, but the whole of Fermanagh South Tyrone in Westminster.”

Ms Foster said that she hopes that a decision will be made soon, however, did not believe that the parties were leaving it late.

“We’re not so close to it. We’re only at the start of March, we’ve April and the elections on the 17th of May and I would be hopeful we would have a decision in the near future. And I would hope that the leaderships of all of the unionist parties will come together and give us a decision very soon.”