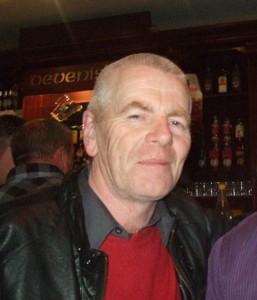 By Ryan Smith
THE DEATH OF a well-known Enniskillen man, whose body was found in Lough Erne on Friday, is not being treated as suspicious by the PSNI.

The body of 58-year-old father of three, Kieran Judge, was  recovered near Riverside, on the Cornagrade side of  the Erne in Enniskillen, a short distance away from where the body of Kieran McAree, 23, had been found last month after several months of searching.

Police have said that the death of Mr Judge is ‘not being treated as suspicious’.

The deceased was highly regarded in the local soccer community for his work with Enniskillen Town United, while his funeral, held in St Michael’s Church on Sunday morning, was largely attended.

A father-of-three, Mr Judge was a son of Kathleen and the late Benny.

He was the father of present Enniskillen Town first team manager, and former Enniskillen Gaels player, Rory, Toni, and Gary.

At Sunday’s funeral, a guard of honour was observed by the Enniskillen Town United club as the funeral cortege left St Michael’s Church after the 11am Sunday morning community mass.

“Kieran made a significant contribution to this town and county community in several ways,” Monsignor Peter O’Reilly priest, said. “Kieran also shaped our community through his many years of work in St Joseph’s College as technician.

“He took up his post there, more or less straightaway, having completed his second-level education at St Michael’s College.

“Kieran also made a mark on our community through his work for soccer in managing the Enniskillen Town United Team. He gave his energy and talents for many of the young men of our town. Their presence here today from right across the community honours that gift. We are all grateful for what he did.”

Friend and former football colleague, Gerry Connolly, secretary of the Fermanagh and Western league secretary at Enniskillen Town, described Mr Judge’s death as ‘hard to get your head around’.

“The funeral was largely attended, there was a lot of old faces from well back. Players he would have lost touch with over the years,” he added.

Mr Judge is survived by his children Rory, Gary and Toni, their mother Bernie, and siblings Raymond, Vivian and Teene, and mother Kathleen. He is pre-deceased by his father, Benny.