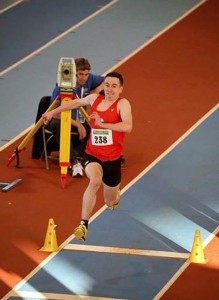 A jump just three centimetres shy of his personal best took Irvinestown’s Conal Mahon to bronze at the senior Irish indoor athletics championships over the weekend.

Mahon had enjoyed a good build-up to the championships taking the Irish Universities title and setting a new personal best.

The NUIG student’s jump of 14:08 at Athlone on Saturday came with the last of his six jumps showing a great desire to rise to the challenge. Ahead of him with gold, Niall Counihan (14:34) and silver, Eoin Kelly (14:27), were two athletes with at least four years on the 21-year-old Fermanagh jumper.

“The week going into it I wasn’t feeling great, so I was a bit nervous about how the competition would go, but I was very happy with how it ended up going.

“My coach [David Doherty] was happy too. We went into the competition thinking I might perhaps be able to jump a personal best, but we both know there’s a big jump there. We’ll both sit down, discuss where we can improve and make our plans.

“I’d love to go out and compete again at the weekend, but that’s one of the main things about athletics, trying to stay patient. You just need to concentrate on training. You always think that if I could compete this weekend that I could jump this distance, but you need to think about the long term aims. You’re looking for something bigger than just jumping a personal best. Hopefully you can jump well over your personal best later in the year, you just have to concentrate on your training for now.

“I know there’s a big jump out there. The result in Athlone gives me momentum going into the outdoor season,” said Mahon.

That outdoor season gets underway in six weeks time at the Mary Peters track in Belfast where the Irish universities championship takes place. That will be a pivotal competition in Mahon’s season. The Irish universities international team will be picked on the basis of performances in Belfast and Mahon intends to train hard ahead of it.

“International universities is quite a high standard and the higher standard you’re in the more likely you are to jump well,” said Mahon.