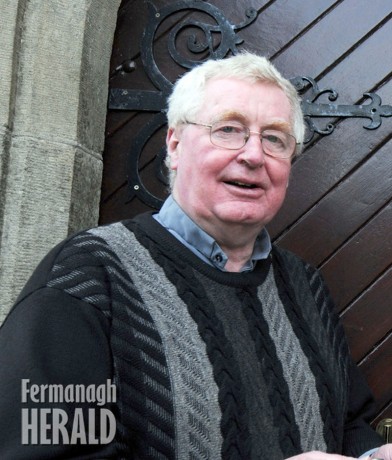 THE parish priest of Newtownbutler, Fr Michael King who officiated at last week’s Traveller wedding at which the bride’s uncle was fatally wounded on the roadway outside just as the ceremony was about to start, has told the ‘Herald’ he will be doing no more Traveller weddings.

Fr King had earlier asked guests outside St Mary’s Church – ‘they were shouting at each other and there were fisticuffs as well’ – to move away from the primary school beside the church.

Then, when he was about to marry Matilda McGinley (17), the niece of one of two men who were shot – he subsequently died in hospital – and 16-year old James Connors, he was told of the shooting outside.

“I didn’t hear the shots or anything. I went out a second time and I saw a man lying on the footpath, but he was able to get into a van and he was driven away.”

He then carried on with the wedding.

Fr King said he did between 5-10 Traveller weddings a year, either in St Mary’s or in Donagh church which is also within the parish.

“What happened last week has certainly put the tin hat on it. In the first place, it’s not a paying proposition because half of them will not give you money. Sometimes, you’ll get €50 and sometimes nothing.

“Then, there’s the paper work you’ve to do, especially if they’re under 18. The couple have to get parental agreement, and, there’s an A4 form to be filled in for the bride and groom and, if they’re under 18, you have to send off pre-nuptial papers to the Town Hall.

“You’re talking about three hours’ work and then do the Mass after that.”

So, why does he do Traveller weddings in the first place?

“I have that said to me when I wasn’t happy and I refused. ‘Are you discriminating against us?’, they will say to me. I tell them they’re too young, but I give in eventually.
“They won’t do the pre-marriage  course either, and they’ll say to me: ‘you talk to them for an hour and that will do rightly’.”

Fr King then revealed that he had a problem with anti-social behaviour brewing at previous Traveller wedding he had done.

“As I said in one interview, there was always the fear that trouble might break out, that they weren’t telling you the truth, and I was always glad when they were gone.

“As well as that, they keep you waiting, maybe for two hours. The wedding may be fixed for 12 o’clock and they might not come till 2 o’clock. You’re placating them and placating them, and it isn’t worth the hassle.”

Fr King did raise some eyebrows in resuming last Wednesday’s Traveller wedding after it was initially stopped when shots were heard outside, on the roadway.

“I wasn’t going to do it, but the bride’s mother begged me. They realised there was a shooting, but they didn’t realise it was fatal. Yes, the man who died was an uncle of the bride but, after I married them, they spent half an hour in the chapel taking photographs.

“The bride certainly was a wee bit fearful and she remained that way throughout the whole ceremony, but, when I was finished, I didn’t wait in the chapel. I left it to them to take photographs.”

Fr King said the PSNI had confirmed to him that the fatally wounded man whom he saw getting into the van died one and half hours later, in hospital, by which time the wedding was over.