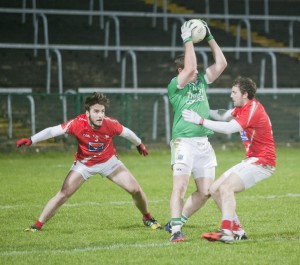 Sean Quigley has the ball, but he also has plenty of company.

Perhaps it is simply in our nature. I was chatting a man on Sunday morning about the Fermanagh Louth game the previous night and as is always the way we were picking over the bones of the contest and dissecting things from every possible angle.

After a few minutes of chat I realised that we had been concentrating on the negative and being critical of a number of aspects of the teams play.

This was of course spectacularly unfair because there was an awful lot good about Fermanagh’s performance on Saturday night. So, while it is important that improvements are always sought we should also acknowledge the work that has been done and the standard of football that was produced at times against Louth.

With this in mind let’s look at two positive areas and two areas where things could be better following one round of the NFL.

Positives
1: Plan, purpose and poise
The three Ps. Fermanagh had them all on Saturday night. The plan is there and the players are buying in to it. Dropping Barry Mulrone back into the half back line and leaving Ryan McCluskey as a sweeper has worked well. On top of that Fermanagh have moved their play on and we see more players attacking as a wave than perhaps we saw before.

As players get to know the system their confidence is growing and there is a real purpose to their play. Not only have they bought into what the management are saying but they are trying their best to implement it when they go out on the pitch.

There is also a real sense of poise about the team. Sure, there are still times when the ball is given away and wrong options taken but by in large the players are demonstrating a much greater calmness on the ball. Pete McGrath has always talked about good players making good decisions and we are beginning to see this come to fruition.

2: Togetherness
It is plain to see that this is a Fermanagh team pulling in the one direction. It is hard to overestimate just how important this can be to a team’s success. I often think in Fermanagh we should use our small geographical size to our advantage. Because of it we can really build a strong team spirit and camaraderie. This squad certainly seems to have done just that and it is something which bodes well for the future.

Areas to improve on
1: Variation in attack
What often happens teams when they have a marquee forward playing well is that they get over reliant on him. That was in danger of happening on Saturday night with the way Fermanagh played in the final third during the first 35.

Of course we want Sean Quigley on the ball but we are at times in danger of becoming too one dimensional. For those first 30 minutes on Sunday you could see Fermanagh were trying to work the ball into wide positions and deliver long diagonal ball into the full forward line of Quigley and Eoin McManus.
This tactic was not bearing much fruit however and we need to be careful moving forward.

Every team we will play will firstly look to shut down Quigley and if we play predictable football and keep firing in long ball after long ball into him then opposition defences will be able to cope with it. Quigley will be at his best when Fermanagh have a number of different attacking strategies.

On Saturday night Fermanagh reeled off four points in a row just before half time and it was noticeable that these scores came from sweeping moves at pace. We have good players with lots of pace and power who are capable of playing this running game and when we mix both this with quality long ball we will see our attacking play take a leap to the next level.

2: Pressing the play-maker
This was not so much in evidence on Saturday night against Louth but it was noticeable in the McKenna Cup campaign and in particular the semi-final against Cavan. Fermanagh play with a defender at wing half forward who drops back into defence. At the present moment that is Barry Mulrone who picks up an opposition forward and leaves Ryan McCluskey to sweep.

This has been successful and is certainly a system I would advocate for Fermanagh this year, but there is one draw back and that is the fact that the opposition can have a wing half back free. Cavan used Marty Reilly, who is an excellent ball player, in this role and he caused real damage to Fermanagh. As the season goes on I can see more teams, when they play against Fermanagh, putting a play-maker in their own half back line who will have a free licence to attack.

So, it is imperative that this player is pressed high up the pitch and not allowed to dictate things.