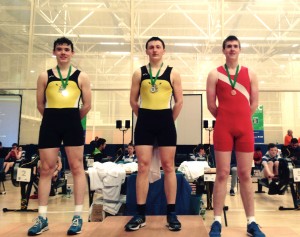 Last weekend saw Portora Boat Club sent 60 rowers to Limerick to compete at the Irish Indoor Rowing Championships. This event was an important part of selection for junior rowers looking to gain a place in the Irish team for racing in the summer.

The University of Limerick sports hall had been transformed into an arena with 50 rowing machines all connected to large screens to display live racing. The dry air in the arena was not ideal for fast times but many Portora rowers still managed to set personal bests.

Barney Rix knew he was the man to beat in the J18 men’s category having pulled a Portora Boat Club record time of 6.18 before Christmas and he delivered the Gold medal In a time of 6.25. Sam Armstrong and Euan Gebler also featured in the top 20 with Ryan Ballantine putting in a strong performance on a bike test due to a shoulder injury.

Elizabeth Clarke put in personal best performance in the J18 girl’s race winning the silver medal in 7.21. Emma Glover finished eighth with 7.33 and Lydia Mulligan, Carrie McShea and Sophie O’Dolan all place in the top 20.

Leonora Kennedy was part of the Irish rowing team for the past two years and is again looking to gain selection on the team with her sights on the Rio Olympics next year. She pulled 7.00 finishing in bronze. Gerry Murphy also put in a fine performance finishing second in the men’s 50+ Lightweight.

First in action on the day was the men’s J14 squad who raced for four minutes. Robbie Mills put in a great effort to finish eighth against strong opposition. On the girl’s side Zoe McCutcheon after only five months of rowing put in an excellent performance to win a silver medal. Alicia Clarke and Maria O’Doherty demonstrated their potential by finishing fifth and sixth respectively.

The J15 squads race over a slightly longer five minutes distance. Tom Chaffey put in a strong performance to rank in fifth place while Caitlyn Fee led home the Portora girls in her category finishing eighth.

The J16 –J18 categories are all raced over 2000m and all of the top juniors in Ireland were present in search of Irish team selection.

Mia Jayne Elliott was in a three way tie in the girl’s J16 category as two much larger rowers pushed her hard to the line. Mia claimed a silver medal in a time of 7.32.4 which was a four second personal best and half a second off the gold medal.

In the boys J16 category Portora dominated with Aaron Johnston taking the gold in 6.44 and Ross Corrigan silver in 6.46. Callum Baker placed seventh and Connor McLaughlin Borlace ninth in the same category.

The Boat Club now turns its attention back to the water racing with the Lagan head in Belfast on Saturday 7th February.