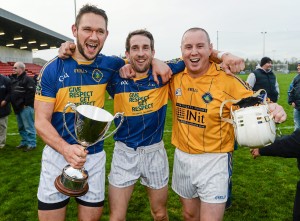 Having beating red hot favourites Cushendall last December to land the club’s first ever Ulster club SHC title, you could say that Portaferry know a thing or two about upsetting the odds.

That’s handy, because they’re going to have to repeat that trick when they take on Limerick and Munster champs Kilmallock this Saturday.

Playing his part in that effort will be Lisbellaw native Kevin McGarry. McGarry has been hurling with Portaferry for seven years now having married into the locality.

He had already starred at college and inter-provincial level so he was welcomed with open arms by the St Patrick’s, eventually making the number 11 jersey his own.
So, how has he been taking to the novel experience of preparing for an All-Ireland semi-final?

“It’s been fairly hectic,” said McGarry. “I think Christmas Day was the only day we got off, so yeah we’ve made a few sacrifices, but we’re all happy to make them.”

One further sacrifice to make will be the trip down to Thurles where Portaferry will be looking to beard the lion in their lair. McGarry, for one, isn’t concerned by that inconvenience in the slightest.

“We’d go to Kilmallock to play them, we really don’t care where it’s at,” said McGarry. “I haven’t heard one grumble yet from our supporters about the venue, all the talk has been about the game.

“We’re totally and utterly swarmed in blue and yellow in Portaferry. You drive into the town and nearly every house has flags or bunting or banners or there’s teddy bears tied to lamp posts. It’s pretty crazy at home at the minute.”

Of course the Portaferry centre forward has been receiving messages of encouragement from the Erne county and the Fermanagh based McGarry clan will be making the trip to Tipp too.

But while the fans can enjoy the occasion, it’s a little more fraught for those tasked with trying to take down the Munster champions. But it’s a job the Ards men have set themselves to with a passion. The DVDs and the inside lines have been sourced, but McGarry is adamant that Portaferry won’t let the Treaty men set the agenda.

“Our key driver is how we’re going to perform and how we want to dictate the game.

We’d like to think that we’re experienced enough to know how we’re going to manage this campaign.

There’s a lot of experience playing hurling at county level in the team. We have eight or nine players who won the Christy Ring with Down a couple of years back,” said McGarry.