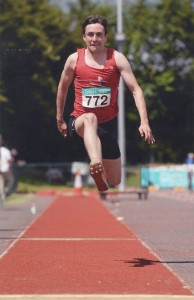 Conall Mahon is in flying form.

Irvinestown triple jumper Conall Mahon had a very profitable weekend, capturing the Irish Universities title in Athlone on Friday before setting a personal best with his club Tirconaill AC on Saturday.

His Universities win followed a silver medal at the end of January in the Irish Indoor under 23 championships which was secured with a jump of 13.44m.
While Mahon admits to being a little disappointed with under 23 silver he has pushed on in no mean fashion since.

“I came first in the Irish Universities Championship on Friday with 13.99m, which is my second best ever jump indoors. I was very happy with that.

“Once that got the confidence going I jumped another personal best on Saturday of 14.11m for my club Tirconaill AC in Donegal town.

“I’m second ranked in Ireland at senior level at the minute and on Saturday week I’ll have the national seniors so I’m feeling confident going into that,” said Mahon.
The 21-year-old NUI Galway student believes his fine form this season is the product of a lot of hard yards over the past few years.

“I’ve been training hard. This is the culmination of three years of hard work coming together. At the start of the season it was maybe confidence that I was lacking, but once you get one good jump it all starts coming together,” said Mahon.

While he is making the most of the facilities at NUIG, the Earth and Ocean Science student is under the guidance of David Doherty at Tirconaill AC.

“He usually gives me my sessions and then there’s a track here [at NUIG] and I’m on the scholarship programme down here so I get free gym and that kind of thing. The set-up is very good,” said Mahon.