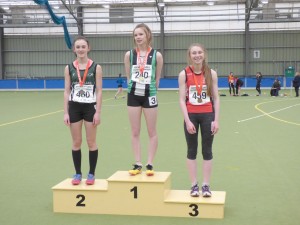 Warnock is better known as an 800m runner, but was unavailable to compete in this distance. The talented Tempo girl qualified by winning her heat with a time of 27.89. The final was one of the closest on the day with Warnock improving her time to take silver in 27.79, just one one-hundredth of a second behind the winner.
The result qualifies Warnock to take part in the All-Ireland Indoor track championships to be held in Athlone at the end of March.

There were plenty of other great results for Enniskillen Running Club junior athletes this past week.

In the boy’s first year event, Oisin May (St Comhghall’s) had a very strong run and finished fifth and new recruit Daniel McDonnell (St Comhghall’s) finished 28th.
All of these athletes will be representing their schools in the upcoming Ulster E-Districts Cross Country Championships to be held on Wednesday 11th February at the Necarne Estate.