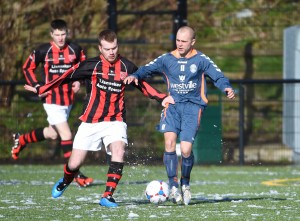 Lisnaskea’s Brian McDermott and Derrychara’s Mark Gallagher tussle for the ball in midfield.

This was a proper cup tie, competitive and tight throughout the 90 minutes but it was the home side who sneaked into the last 16 thanks to the odd goal in a five goal thriller.

In truth there could have been many more goals as both sides created numerous opportunities.

Brian McDermott proved a real thorn in Derrychara’s side and he helped himself to two goals while Jason Flanagan added the other during a profitable 15 minute period midway through the second half which swung the tie in the hosts favour.

Rovers settled the better, but Derrychara grew into the task at hand against higher division opponents. Tiarnan Magee had the first sight at goals, a low drilled effort going narrowly wide of the post before Roly Williamson’s cross saw Lee Glass force a save from the home keeper.

On the half hour mark Tiarnan Magee crafted an opening for himself with a delightful turn on the edge of the penalty area and subsequently found the bottom corner with a crisp low drive.

As the interval approached Dilly Martin almost doubled Derrychara’s advantage, his shot from distance well saved as the half ended with the visitors holding a narrow lead.

With 65 minutes played Rovers eventually found a way past Carl Morrison as the visitors struggled to clear a high ball into the penalty area, McDermott sharpest to react and plunder a leveller.

Moments later the lively front man beat the offside trap to slide in his second while Jason Flanagan moved his side 3-1 to the good.

Stunned by the concession of three quick goals Derrychara battled back and Andy Carleton, Lee Glass and Tiarnan Magee all had chances to pull back a goal as the game became stretched.

With three minutes remaining Glass dispatched a penalty for hand ball to the net and in a grandstand finale Roly Williamson almost forced extra time, a powerful drive grazing the crossbar.

“It was a proper cup tie, both sides really went at it and it could have finished nine all. It wasn’t to be our day but performances like that over the closing few league games will help us survive in the Division,” said Johnny Noble, Derrychara boss.