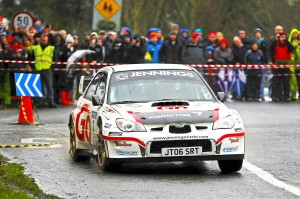 Garry Jennings and Rory Kennedy in action at the Birr Stages in their Subaru Impreza.

Donagh Kelly and Kevin Flanagan have really made an impact on the opening rounds of the Irish rallying scene having won last weekend’s Birr Stages and in turn scoring a third rally win in a matter of weeks.

Garry Jennings and Rory Kennedy finished a very creditable second overall in last weekend’s event, which was the opening round of the Irish National Rally Championship, newly sponsored this season by Triton Showers.

The line up for the event was excellent, a fleet of world rally cars and the best of every class of driver made the start list.

The stage times from the top six crews was very close and after the half way point any one of the drivers in the top ten still had a shot at victory, especially after stage seven when rally leader Declan Boyle suffered a puncture to drop him out of the top ten places.

Jennings and Kennedy’s event did start with some drama as there Subaru Impreza’s windscreen kept misting up in the dreadfully wet conditions which did hamper the crew. However they clambered back to a fine second and recorded a healthy points haul on the opening round.