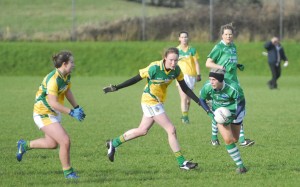 Marcella Monahan looks for support as she pushes forward.

Fermanagh ladies are still waiting for their first league win of the year after falling to neighbours Leitrim in their second game of the season. For the Connacht girls this victory is their third in a row and it puts them on top of the table after an impressive start.

Fermanagh lost in their opening game against Waterford and while they were on the end of a big defeat in that game they were much better against what is a quality Leitrim side when they once again were on their travels on Sunday.

“I was much happier at the weekend,” revealed Fermanagh boss Lisa Woods, after the game.

“We were disappointed with our performance the first day, but I would be much happier with how we played against Leitrim. It was much closer and we were in control for the last 15 minutes, but just could not get the goals we needed to get the win.”

Fermanagh were all square at half time on Sunday but the green and gold landed three goals in the opening 15 minutes of the second half that was to prove too big a mountain for the Erne girls to climb.

Fermanagh hit two goals in that first half through Aisling Moane and Joanne Doonan. Indeed they were three points to the good as the half time whistle beckoned before Roisin Gleeson was harshly adjudged to have fouled a Leitrim forward in the area. Aine Tighe converted from the spot to give her side a real lift before the break.

“We had aimed to go in level or a point down. We wanted to hold Leitrim and we did ,but we could do nothing about the penalty being given, that was something out of our control and it definitely was a big boost for Leitrim,” said Woods.

After the break Leitrim hit a real purple patch and rained in three goals through Aine Tighe, Ailsing Tighe and Dearbhaile Beirne.

Fermanagh didn’t drop their heads however and they were led brilliantly by a half back line who were impressive throughout. Marita McDonald, who was deployed as a sweeper last year is taking hold of the number six jersey and she was flanked by Marcella Monaghan and Marie Connolly with all three ladies having a huge influence on the game as Fermanagh fought back.

“I was really pleased with how the girls dug in and did not drop the heads. It would have been easy to do that but we finished the game very strongly and could have got the win as I thought there were a few more goals in us,” the Fermanagh manager said after the game.

Lynne McFrederick in midfield was a real driving force and she clipped over a couple of points as the Erne girls tried to claw back the deficit. Noelle Connolly was dangerous in attack while Caroline Little was accurate with free kicks and Shauna Hamilton also made a valuable contribution around the middle of the field.

Fermanagh were rewarded with a goal just before the final whistle, Sharon Little converting, but it was too little to late as Leitrim held out for what was a deserved win.

This Sunday Fermanagh travel to Wexford where a victory would be most welcome.

“We have another long journey ahead of us but I would be very hopeful of picking up the win. We showed good improvement on Sunday and if we can do the same again I would be disappointed if we did not come back with the two points,” Woods explained before concluding,

“We have the next two games in the league after Sunday at home and that will be a big bonus. We probably had the most difficult start playing Waterford and Leitrim in our first two games but the wins will come. We are on the right track.”