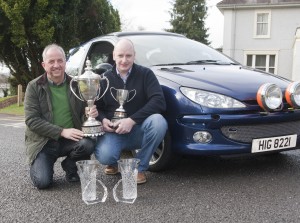 David Howard and Benny Grainger have been presented with their silverware for winning the 2014 NI Navigation Rally championship.

Navigation rallies see driver and navigator left in the dark as to the rally route until just before the start.

Howard and Grainger won the Erne Safari in 2013 which piqued their interest in racing a full championship programme.

“We decided we’d go on and do the Championship in 2014,” said Enniskillen man Grainger. “There were six rounds, starting with the first run by Queen’s University. The same pair didn’t never won two events and we had second places in nearly every rally until the last one.

“As we went into the last round any of three pairs could have won it. The last round, The Firecracker, took place in Lurgan and we came out on top,” said Grainger.

“The format is primarily about navigation, and you need a good navigator to do well in it,” said Grainger, paying tribute to his map-reader from Omagh, David Howard.
The pair aren’t resting on their laurels and have a busy few months planned for their Peugeot 206 GTI. They are only just back from the first navigation rally of the new season in Rathfriland last weekend. They recorded a second place at the Down venue and look set to make another major push for honours this year.

Next up will be the Erne Safari on 6th March, and that will be followed by the TDLC in Kilkenny in April, a three day event which they will be doing in a Mini Cooper.