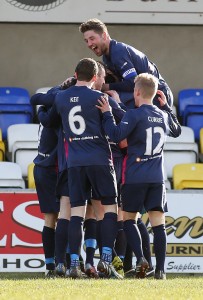 His 27th second strike against Stute has made Liam Martin Ballinamallard’s joint top scorer in the league.

He shares that honour with Jason McCartney, and Martin is all set to take him down.

“Whitey signed me to get a few goals and I’m glad I’ve got a few this year,” said Martin. “I didn’t get any last year, so I’m just happy to get on the score sheet. Jason McCartney and I both now have five league goals. I just want to overtake him more than anything at the minute. Some people have been saying that penalties shouldn’t count, but I suppose we’ll have to let him have the one against Coleraine!”

Martin’s fifth league strike of the season came within moments of the kick-off at Drumahoe, and he was as surprised as anyone to be presented with a chance so early in the game.

“The ball was played through by Ryan Gamble,” said Martin. “I saw the defender coming and I checked back in and, I don’t know how, but I ended up in the box one-on-one with the keeper. I couldn’t believe I was one-on-one so early on, but I wasn’t going to turn the chance down.

“We had our chances and towards the end they created one or two. If we had taken our chances we’d probably have come away with the three points, but then again our away form has been that bad that we’re kind of happy with improving that record.”

Now though it’s back to the training pitch with an extended break before the visit of Glenavon. Martin isn’t too thrilled by the prospect.

“It’s a bit of a break on momentum, but we’ll just have to get on with it,” said Martin. “After the Warrenpoint game [a 0-7 defeat] we took a very good point against Linfield and then another one against Portadown which got us going. Then the last minute win against Coleraine was huge. You could tell how good our momentum has been because the draw against Institute away was kind of disappointing, even though our away form has been so bad. I think this is the best spell of form we’ve been through all season and everyone’s just looking forward to getting going again.”

Glenavon will go into that game on the back of a catastrophic 7-3 defeat to Crusaders. They were humiliated in the BBC Radio Ulster feature game and Martin knows from experience there’s nothing more dangerous than a wounded animal.

“It’s like our result against Warrenpoint, we bounced back straight away. We wanted to go out and prove a point. Glenavon could be doing the exact same. We’ll just have to take it as it comes. I think everyone will be up for it. We have our own target for what we want to achieve and we won’t be focusing on what’s gone on for them,” said Martin.