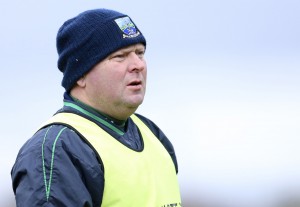 Last year ended in heartache for Fermanagh hurlers. Having lead 2-8 to 1-10 at half-time in the Lory Meagher final, Longford came back strong in the second half to take the title on a 3-18 to 3-16 scoreline.

So, while Fingal are the guests in Brewster Park this Sunday, no one is in any doubt as to where the real focus lies this year.

Sean Duffy and Seamus McCusker share managerial duties this term, with Kevin McGarry, Peter McEvoy and Stephen Smith in the back room team. Sean Duffy spoke to the Fermanagh Herald about his side’ ambitions for 2015.

“The Lory Meagher is what we’re targeting this year, that’s our aim,” said Duffy. “We’ve believed this past four years that we have a team good enough to be competing at Nicky Rackard level. It’s a bit like a soccer team trying to get out of a division, it’s hard to get out of it even though you might believe you’re playing a level above.

“We fancy ourselves against the Tyrones or any team at that level, and Tyrone won the Nicky Rackard last year. We just haven’t been able to get over the line in the Lory Meagher, but it’s our aim to do it this year.”

Fermanagh finalised their league preparations with a game against Leitrim in Cavanacarragh on Sunday. The hosts turned in an decent performance, running out winners by four or five points, but for Duffy the most pleasing aspect was seeing some injury returnees get game time.

“We got Danny Teague back and Francie McBrien made a cameo,” said Duffy. “Mark Slevin didn’t come on, but he’s getting a lot closer. It’s more about getting guys back. We had ten men on the injury list a fortnight ago and getting those men back is the main plus.”

Despite that cameo McBrien remains a doubt for the Fingal game while Barry Duffy will definitely need another week. Elsewhere back trouble has also ruled out Roslea star Marty Beagan for the foreseeable.

On the plus side Jack Gavin, Conor McShea and David Teague have all impressed and will be pushing hard for starting places.

Fermanagh’s pre-season fitness has been conducted under the eye of Coa and Enniskillen Town United player Ryan Hanna and Duffy is delighted with the shape his men are in.

Another addition which will greatly strengthen the panel will be the return of Portaferry centre forward Kevin McGarry. With the St Patrick’s exiting the All-Ireland race last weekend, his focus is back on Fermanagh. He is unlikely to figure against Fingal, but Duffy is hopeful he will be back on board for the trip to Louth the following week.

Turning to the visit of Fingal, Duffy appreciates that the metropolitans will provide a very stiff test.

“Fingal were in the Nicky Rackard final last year so they are a very good side,” said Duffy. “They are going to be tough opposition, they came down from the division above last year so they are probably the fancied side to go up. We played them two years ago in the league in Croke Park and they beat us by four or five points. They won’t be miles ahead of us, but it’s definitely going to be a tough game. But we’re looking for a big performance, we’ll not fear them.”