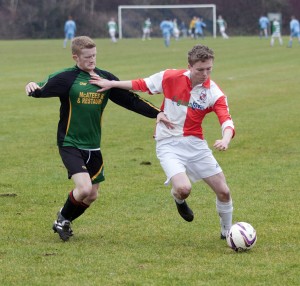 Stuart Rainey in action for Rangers.

Enniskillen Santos’ Coca Cola Irish Junior Cup hopes came to an end in Belfast on Saturday afternoon when they slumped to a disappointing 1-0 defeat at the hands of Tullymore Swifts.

It was a game where the visitors didn’t play the football that they are capable off and that as much as anything disappointed Joe Keenan.

“It wasn’t a good display from us”, admitted Keenan. “We had five players unavailable from the previous week and that was a big blow for us but we should still have won the game.

Compared to the sides that we beat in the previous rounds Tullymore Swifts were nowhere as good and that was disappointing.”

The game was played on a bumpy pitch, not that the visitors were offering that up as an excuse.

Jason Keenan had a couple of chances in the opening 45 minutes but he was unable to keep his shots down and they flew over the bar. Tullymore Swifts had their chances as well with Santos stand in keeper Darren Tummins saving twice.

A couple of minutes before the break Colin Murray had an opportunity, but he was thwarted by a superb block from a home defender.

On the stroke of half-time the hosts grabbed what proved to be the only goal of the game when a corner came in to the back post and their forward rose unchallenged to score with a bullet header into the roof of the net.

In the second half Enniskillen Santos piled on the pressure but they struggled to break the home defence down. Keenan had a couple of half chances but they created nothing clear cut.

Stephen Clarke was sprung from the bench despite not being fully fit and he had a chance with his first touch but it was obvious that he was off the pace.
A disappointing end to a good Cup run, but Santos will now fully concentrate on their promotion bid.