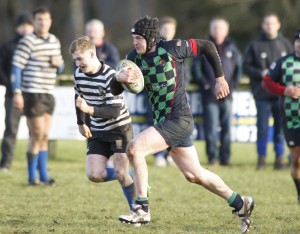 David Sharkey finds some space as he takes the ball up the middle of the park.

Both sides started this game with significant injury lists. It was also the first of five games in 14 days for a Valley side, chasing league leaders Instonians, the result of being ’too successful’.

The game was decided in the first five minutes. The first Valley scrum shoved CIYMS back and number eight, Sharkey, later to be named man of the match, picked up and drove over for a 5-0 lead.

From the restart CI kicked a penalty, but their hopes were quickly extinguished when an immediate Valley penalty from Armstrong left Valley 8-3 ahead. After this burst of life the game became very disjointed which was not helped on 14 minutes when uncontested scrums became the norm when CI lost 2 props to injury. This nullified the Valley power and the dangerous CI backs had much cleaner ball than might have been anticipated otherwise.

It made little difference as on 19 minutes a simple front of line out move from McKenna and Cobane saw the latter score in the corner for a Valley 13-3 lead. Again CI came back again with another penalty for 13-6 but it was to be their last score of the game.

This was also the half-time score and there was little for the watching crowd to enjoy in a frenetic but poor first half disrupted by injuries and uncontested scrums.
The second half was little better, but Valley added two further tries to gain the bonus point.

On 55 minutes Sharkey again broke through in open play and found centre Stott on his shoulder. He had two players to beat, but with a sidestep and then a sublime hand off he made the gap to score under the posts. An Armstrong conversion saw Valley comfortably lead 20-6.

On 63 minutes Valley increased their lead when a fine grubber kick behind the CI defence from out half and captain Best saw Armstrong race through pick up and drive over the line for the fourth try and bonus point. Armstrong duly converted and Valley led 27-6. The game then petered out, though in the last five minutes CI battered a 14 man Valley line, a Valley prop having been sinbinned, to try and get a consolation score but the defence held out.

Valley move on to Wednesday night when they travel to Dromore to replay a game they were winning 25-10 when injury stopped play after 68 minutes.

The same result is unlikely as in the intervening period Valley will be missing four players unavailable or injured from that game, meaning wholesale reorganisation will be required.