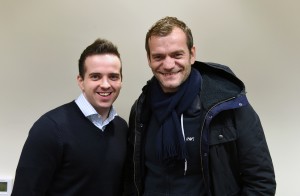 Northern Ireland goalkeeper Roy Carroll has hinted at the possibility of him turning out for Ballinamallard United in the future.

Carroll, speaking to the Fermanagh Herald during a break from his club Notts County said, “You never know. You never say never. I went down to watch them against Linfield last week and they did very well. Linfield would be very strong and Ballinamallard after losing to Warrenpoint came back and got a good point against Linfield. It showed the passion of the players, and the supporters got right behind them.

After a spell which saw him leave England to keep goal with Odense, OFI Crete and Greek kingpins Olympiacos, Carroll has returned to more familiar climes. It’s a move which has worked out well for the Fermanagh man.

“Leaving Olympiacos and coming back to England was a big decision because at the time I would have liked to have stayed, but a new manager came in and things had to change.

“I decided to move back home and got the chance to play for Notts County and decided to take a chance on League One. Everything has worked out very well for me and we’ve been doing quite well.”

But Carroll was frank is stating his priority was playing for Northern Ireland. And with a positive start to the Euro 2016 campaign he’s in a happy place at the moment.

“We’re not jumping too far ahead of ourselves. It’s still a long campaign and we’ve got a big game coming up in March against Finland and it would be nice to get the three points there.

“We’re very happy winning our first three games and had a disappointing result against Romania out there. We’ve played three away games and got nine points and everyone is over the moon at the moment, but we’ll keep our feet firmly on the floor and focus on the next six or seven months because there is still a long way to go.”

Carroll admitted 2014 had been good to him and he was just happy to be back playing football and particularly with Northern Ireland.

The Tamlaght man famously played two games in less than 24 hours in mid November last year. He was between the sticks in Bucharest for Romania v Northern Ireland and then raced home in time to keep a clean sheet as Notts County defeated Coventry 0-1 away.

“Northern Ireland was my first focus,” said Carroll. “We lost 2-0, but I had spoken to the manager previously and told him there was a chance to come back to play for them on the Saturday.

“But I prepared properly for the game on the Saturday. I didn’t get much sleep but did as much as I could and the players in front of me at Notts County kept the shots down. I don’t think they had a shot on target, so it was nice to come back and get a good result.”