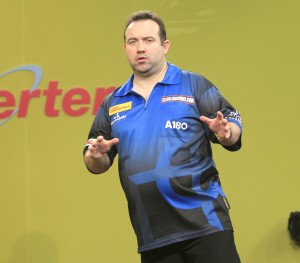 The past weekend marked a milestone in Brendan Dolan’s career as he broke in to the PDC Order of Merit top ten for the first time.

The Belcoo darter was understandably delighted with the achievement.

“It’s definitely one of the markers you set down for yourself,” said Dolan. “You set yourself one to make the top 32 and then you make the 16 and then it’s top ten. It’s pleasing to be there at the minute, but things are very tight so from one week to the next it could chop and change, but at least I can always say I made it to the top ten.

“It’s a statement of how well I’ve been playing over the past couple of years to get up that far. I, myself, believe I haven’t done well on TV this last three odd years and to be up in the top ten without having done well on TV, where most of the prize money is, I’m very pleased.

“You find with TV runs you move up through the rankings a lot quicker. I’ve done really well on the floor and I’ve a lot of confidence and a lot of belief. If I’m playing week in, week out and doing really well against the best in the world I’m sure I’ll bring it to the TV soon,” said Dolan.

This week sees Dolan travel to Germany for the first European Tour Event of the year. That will be followed by three UK Open qualifiers the following weekend. Then at the start of March the World number ten will be looking to make his mark in the finals of the UK Open in Minehead which will be broadcast on ITV 4.

The stakes are high