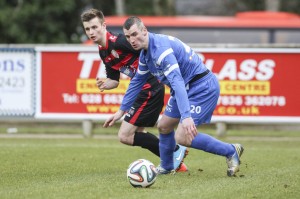 Ballinamallard face one of the biggest games of their season on Saturday when they travel to Derry to take on bottom side Institute.

In fact it’s the biggest weekend of the season for the club with Dungannon taking on Warrenpoint.

If the permutations go right then it could be a great weekend for the Ferney Park club, but manager Whitey Anderson knows he and his players can only deal with their game and their result.

The Ferney Park club are nine points ahead of the Drumahoe outfit, but they have had a win and a defeat against Paul Kee’s outfit this season.

Manager Anderson knows it will be a big day for his side. A win will put them 12 points ahead of ’Stute, but a defeat will bring the Derry side back to within six.

“It will be a big day for us on Saturday. Institute manager Paul Kee has intimated that he might step down because of results, but I don’t think that will happen. He has been a mainstay for Institute for several years now.

“There could be a rallying call from Institute to give everything for their manager and their club on Saturday. We will really have to get the players up for it and ready for this big game.

“Last week we were content with a point, but to get the other two at the end was a big bonus.

“It was massive. We picked up good points against Cliftonville, Portadown and Linfield recently, but to win that game was massive. The difference between a draw and a win is massive and we must make sure that the good work is not undone on Saturday.

“Psychologically it was a massive day for us. To get that penalty and score that goal and get those two points.

“You would have been three points ahead of Warrenpoint. You are five now and sitting in ninth place.