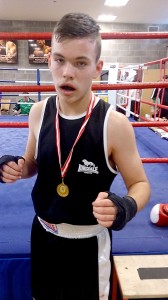 The Erne Boxing Club had another hectic weekend of boxing with a quartet of boxers in action, including three at the Mid-Ulster Novice Championships in Banbridge and one competing for the Tyrone and Fermanagh county team against the Ireland squad in Dublin.

Mulligan fought very gamely against Elmantas Zelepugas (Virginia BC) and bored into his smart boxing opponent at every opportunity. The first two rounds were extremely close with Mulligan’s aggression evenly matched by Zelepugas’s cleaner work.

The Virginia boxer got the better of the final session as Mulligan tired to collect the points victory by a majority decision.

Star performer of the day was Nikodim McKiernan who, after claiming the Mid Ulster 75kgs title by walkover, was pitted against the Malachy Duffy (Virginia BC), the 80+ kgs title holder in a special contest. McKiernan making his ring debut showed no signs of nerves and tore into his much heavier opponent.

Duffy showed a good technique but struggled to contain the Erne boxer and was heavily rocked by a solid right-cross towards the end of the opener.

In the second session a barrage of punches from McKiernan ended matters. After shaking his opponent with a jab-cross combination the contest was halted Duffy was retired.

Meanwhile at the National Boxing Stadium in Dublin, rising prospect Ryan Copeland was representing the Tyrone and Fermanagh select against the National Schoolboy and Youth Squad in a test match.

Copeland was up against Ireland Representative Jacob Florzak (St David Naas BC) in a 60kgs match-up. Florzak boxing out of the southpaw stance posed Copeland a few problems early on but as the bout progress the Erne favourite landed with the cleaner shots and coupled with his greater work-rate took charge of the first two sessions.

The final round was very close but Florzak scored with some good backhand left leads to just nick the round. Tyrone coaches were confident that had the contest gone to the scorecards Copeland would have won the decision.

Erne Boxing Club coach Sean Crowley said, “Despite two of our boxers missing out of the Mid-Ulster Novice championships due to illness, two golds and one silver was a great return. Most satisfying was the performance of Nikodim McKiernan, he’d only started with us back in November and we felt this tournament may have come a bit too soon but judging by the way he applied himself we’ve definitely unveiled a future Irish champion.”

Erne Boxing Club complete their busy January with a team trip to London where they will be taking on a South-West London Divisional Select.
The club’s more experienced boxers Colm McElhill and Aaron Burns will be joined by top prospects Dylan McMahon, Harris Crowley and Ryan Copeland.