Advertisement
HomeSportSports DigestRugbySkins cruise into next round of Towns Cup
Advertisement 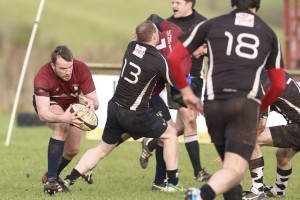 Saturday saw Enniskillen advance into the quarter-finals of the Town’s Cup after a resounding victory over Ards II at Mullaghmeen.

Enniskillen lost influential prop Gareth Beatty in the first minute with a knee injury and he was replaced by hooker Ryan Cathcart, with Stephen Welsh switched to fill tight head. This swap didn’t faze Enniskillen and they stole the very first scrum of the game.

Richard Grey has been dominating line outs in recent weeks and that was the source of Enniskillen’s first points. A well constructed maul from a line out marched it’s way into the Ards 22 before being grounded illegally. Chris McVitty slotting the kick.

After a short Ards possession, Donagh O’Callaghan collected a loose Ards kick on the right touchline before moving it through hands across the field to Zach Charlton who linked well with Nick Finlay who stepped wide on the left before slipping an offload inside to O’Callaghan who side-stepped two on his swerving run to the try line from 50 metres out to score under the posts. McVitty converted to make it 10-0.

Enniskillen continued to cause problems for the Ards line-out and scrambled the ball back for Jamie Johnston to collect and break the defensive line and carry close to the Ards try line. Only fierce Ards defence kept Johnston and Michael Cadden from increasing Enniskillen’s lead, but this pressure forced an infringement at the ruck. Johnston tapped and was unlucky to be held up, but the resulting Skins scrum was irresistible and Ricky Lee duly scored the pushover try.

Enniskillen continued to exert pressure and another line break from Johnston brought play back into the Ards 22. More bone crunching tackles were required to repel the attack, but ill discipline cost Ards another three points.

The second half started as the first had ended. More clean line out ball followed by Finlay carrying to the defensive line before offloading to forwards Johnston and Welsh who made the hard yards. Ards conceded another penalty for being offside and quick thinking Paddy McCleery tapped quickly to capitalise on Ards having not retreated 10 metres from the penalty mark. The extra 10 metres gained put McVitty in kicking range and he converted his attempt to extend the lead to 21-0.
Enniskillen had Ards under pressure from the restart and dominated the scrum. Ards were again penalised for an offside infringement when Lee picked from the base.

Captain Johnston elected, this time, to kick to touch and although the catch and drive took the Skins close, it was a smart reverse pass from McCleery to the charging Johnston which created the try.

Another penalty to Enniskillen was kicked to the corner and following a clean take, was carried with intent by Grey and Welsh. Ards defence pressurised and won their side a scrum on their own five metre line, but Enniskillen’s pack, spearheaded by the front row of Beatty, Cathcart and Welsh, forced the Ards pack backward and when the ball spilt out in the try area, McCleery was first to dive on it and get on the score sheet.

Cathcart took ball confidently from the restart despite good Ards pressure and carried strongly before another penalty was awarded Enniskillen’s way after another ruck infringement. Tidy line-out ball set up Jack Harte and Welsh to break the gainline and subsequently gave Finlay space to attack a retreating defensive line. Donagh O’Callaghan ran a perfect dummy line which attracted the Ards winger allowing Finlay to feed the ball to David Buchanan who ran in from close quarters and set down a try untouched.

After Ards lost a player for repeated infringements the ball was kicked to touch for a line-out and then spread out to the backs for Nathan Richmond to showcase his strength and pace. Ricky Lee was also at hand to advance the ball and after good strength from the forwards, it was Stevie Welsh who added his name to the list of try scorers.

The Ards defence was at sixes and sevens trying to contain Enniskillen and after further pressure, Skins’ took another scrum against the head on the Ards five metre line. Lee passed to McCleery who fed Finlay and he trotted over the line for another to make it 52-0.

The last restart of the game failed the go the required 10 metres and Enniskillen broke right from the resultant scrum through the hands of Lee and McCleery.
Harte carried next, but was not supported quickly enough by his team mates and a penalty was conceded for not releasing the ball. Ards had a chance to finish the game in Enniskillen’s half, but the kick was fielded by O’Callaghan and Enniskillen made one last charge up the pitch for a final try.

Sustained running by the forwards took Skins to the half way line and when Cathcart broke left from a ruck, he evaded the first tackle and found himself in space. Running the perfect support line was Richard Grey who collected the well timed pass and with only the last defender to beat turned him inside out before speeding to the try line and rounding off the scoring.