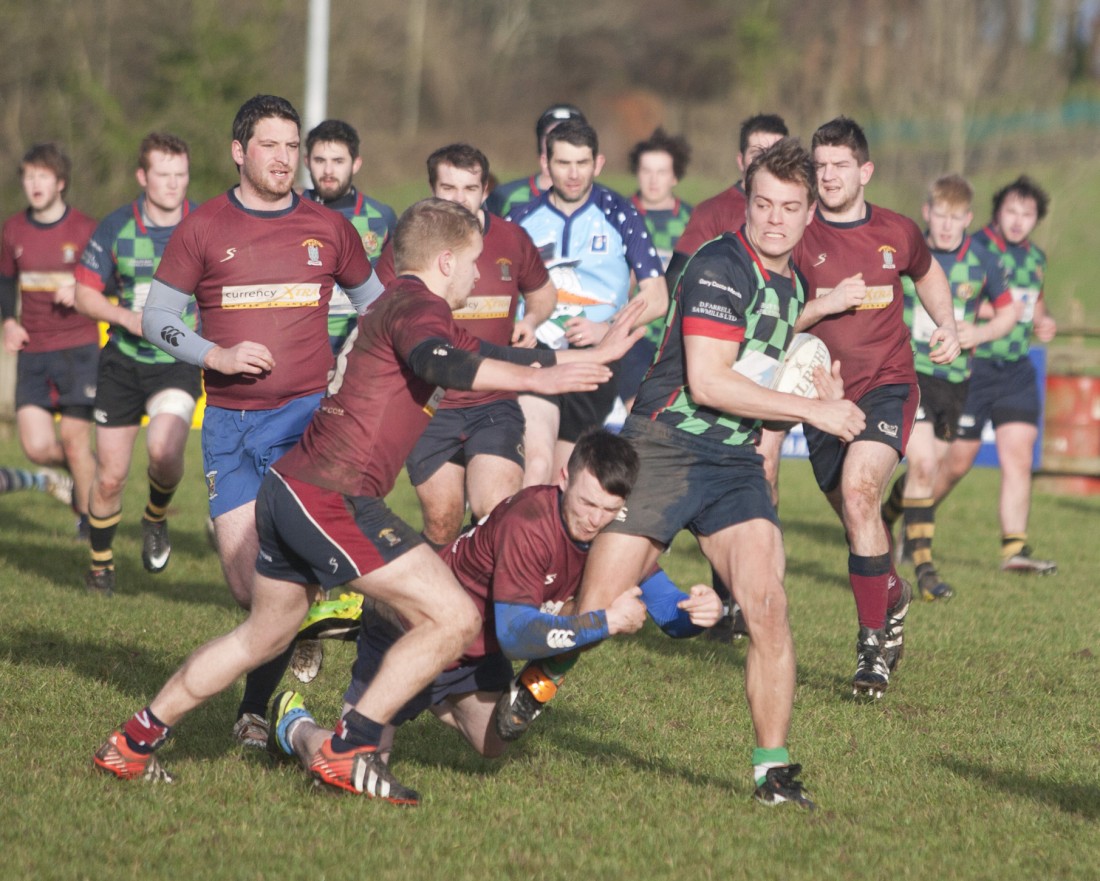 On Saturday the First XV played in their annual encounter against a young Exiles team in an effort to get some game time in the Christmas hiatus.

While the festive cobwebs were evident throughout from both sides and the handling errors were too numerous to count, there was still plenty of entertaining moments as the young exiles side forced a substantial work rate out of a notably pale First XV who really looked to have been tested by the ordeals of the Christmas period.

The game was fairly balanced from the start as both sides looked to play expansive rugby in the spirit of the game, exiles scrum-half Rory Gibson was threatening around the fringes of the breakdown but the lack of game time together showed through as handling errors cut short many attempts to utilise their back line.

Enniskillen certainly had the advantage at the set piece with a full starting front row of Steven Fox, Ryan Cathcart and Gareth Beatty putting serious pressure on the young front row of Adam Farrell, Jamie Gibson and Jonathan Wilson, and the Enniskillen line out functioning well through Kaine Holden with the benefit of half a season’s experience together.

The Exiles kept the scoreboard clear for the first half and the home side must have been feeling fairly humbled by the performance so far, however when it was clear their handling wasn’t at it’s best Skins sought to wear the opposition down with some big carries from Jamie Johnston and Danny Maguire off out-half Chris McVitty, but the defence was good from the Exiles with solid tackling from Philip Dickie and the back row.

Eventually after some good pressure in the exiles half Jamie Johnston managed to cross the try line following a stolen exiles scrum on the 5 metre line to end the stalemate. There was plenty of opportunities for the Exiles in the second half too with Rodney Blair carrying well and also Ben Forbes making a threatening break at one point only for a good cover tackle from Conor Hoy to keep a clean sheet for Skins. Enniskillen managed one more score before full time through Richie Beatty after some close quarter carries deep in the Exiles half.

The game may not have been one of the most flowing to watch but it was a very entertaining exhibition following one of the most “sociable” days of the year and an industrious effort from a young Exiles side. Coach Norman Richmond won’t be blown away by the performance but will be glad to get a run out for the team before the Towns Cup begins.

“The Exiles game was an opportunity to run some of the Christmas festivities off – clearly needed by the performance given albeit the game was played in the spirit that it has grown accustomed to. Credit must go to Ben Forbes for gathering up a good squad of players to test us and it was good to see some of the talent on display that has left Enniskillen behind as they study or work throughout the British Isles.”

Skins must not be complacent in Towns Cup test

Looking forward to tomorrow’s (Saturday) Town’s Cup game coach, Norman Richmond said, “the first round of The Towns Cup against Randalstown will be a stern test. Randalstown defeated us comfortably earlier on this season although we had a number of players missing. Both teams have developed as the season has progressed and we will hopefully be at full strength for this encounter, with Ashley Finlay our only injury worry having picked up a knock in the Omagh game. It will not be an easy game although if we play to our potential then I would like to say we will progress to the next round, but if we are complacent then Randalstown are a smart enough and clinical team who could punish us.”

The game is being played tomorrow at Mullaghmeen KO 2.30pm