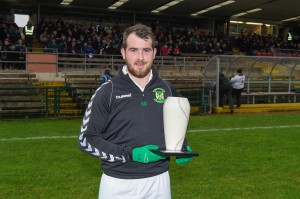 Sean Quigley, Fermanagh Herald Sportsperson of the month for October.

SEASON of mists and mellow fruitfulness was how Keats described autumn. Well it was certainly a fruitful October for Sean Quigley and Roslea as they gathered their first championship and league double since 2011.

The county title was claimed at the start of the month with a 3-4 to 1-5 victory over Teemore. Then St Patrick’s were defeated on the way to a 2-5 to 0-8 win against Derrygonnelly in the SFL division one final. In those three games Sean Quigley racked up a personal tally of 3-6, indeed the conclusion of the race for Sam the month previous saw him crowned the most prolific attacker in the entire country, averaging a point every 8.76 minutes and 7.38 points per game. But it was his wider contribution in terms of stitching play together and picking out that final pass that proved mission critical for the Shamrocks.

Understandably, Roslea marksman looks back on the month with fondness.

“The buzz around the town was brilliant especially when it was against Teemore,” said Quigley. “Roslea and Teemore would always have had a wee bit of a bite come championship games.”

It’s a team game though, and Quigley is the first to acknowledge that. He talks about James McMahon winning senior and junior league and championship medals this year and making his county debut at the start of this season. That’s the depth of quality Roslea have.

“The training that we have is so competitive, not only with seniors, but with the juniors. Everyone is pushing everyone else on. It’s dog eat dog, that was what brought us success this year. There’s so many positions up for grabs. You could easily get a 15-a-side at training on a good night in the summer.

“There were boys coming out that wouldn’t have played for Roslea for years for one reason or another and I think that’s a huge credit to the two lads Mark [Harte] and Adrian [O’Donnell] who came in. They’ve really rejuvenated things and got us going again.”

With Harte and O’Donnell back on board for 2015 the focus has now firmly turned to the coming season and the possibilities it presents.

“From my own point of view and in the club, believe it or not, there would have been a lot of people in Roslea disappointed with the way our year went. The way we went out in Ulster and it was more or less a no show [against St Eunan’s in the Ulster club SFC quarter-final]. All our adult teams won everything that could have been won [in Fermanagh]. But still there is a sense of disappointment in Roslea that we didn’t achieve what we know we can. We want to try and better ourselves and improve this year,” said Quigley.

And more than most, Roslea have mastered the art of applying the lessons of seasons past.

“At the end of the day you can only look as far as your first championship game. We don’t know who that’s going to be, we’ll deal with that as it comes, but with the way that Fermanagh championship football is now with the way the structure has changed it’s open for anyone who wants to win it. Three games will win you the championship.

“We slipped up a couple of years ago, we got complacent against Derrygonnelly and only for that we could have been going for three, four, five in a row maybe. But it shows we can’t be complacent, we have to get our heads down and work hard. We have been one of the top teams in Fermanagh in the past couple of years, it’s just about maintaining that and trying to better ourselves now,” said Quigley.