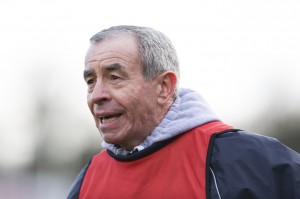 Fermanagh manager, Pete McGrath, was ‘more than happy’ with how the four newcomers to inter-county football fared in their debuts on Sunday while the Down man also gave a clear signal that he is expecting his team to progress to the semi-final stage of the McKenna Cup.

“Derry will be a more formidable challenge, but last season we went up to Derry and put in a very good performance.

“This season we have a lot more work done. The Derry game is a very important game for us to push things forward and this is a competition we are taking very seriously and we are looking to get very positive performances against both Derry and Donegal.”

Last year McGrath described the McKenna Cup as little more than an extension to trials due to the fact he came to the job so late in the day but he is making no such claims this year. Fermanagh are ready and are gunning for victories.

“It is very satisfying to start off the year with a win. Overall we are very happy with the performance. Obviously there is plenty to work on and we will do that.”

Although a strong McKenna cup campaign is important to McGrath, he isn’t losing focused on the main priority.

“We are building everything towards the league in four weeks time and the more matches we can get the better in that regard.”

Turning his attention to the new players who took the field against Queen’s McGrath expressed his satisfaction with how they performed.

“I thought James Allen for a young fella at full back did very well. Full back is always a hairy position. James McMahon knows what the game is about, reads things well and is comfortable on the ball.

“Eoin McManus has a good physical presence and is possibly suited better to further out the field and he knows that he is not as fit as he could be, but he will be better for the game today. And I thought Ryan Lyons put in a very hard working shift.”

The Erne boss was also delighted with how his side stood up defensively. An achilles heel for Fermanagh last season was the fact that so many sides scored goals coming through the centre of the defence and it is clear that a lot of effort has been put in to try and rectify this problem.

“We have a lot of work done collectively in terms of defending and defensive strategies and it was good to see them put into practice today. Queen’s never really threatened a goal which was good for us. We had men back and our tackling was very disciplined and controlled and we did not give away needless fouls.”

But as always there is room for improvement and McGrath explained that there were obvious areas he would like to see work better against both Derry and Donegal.

“Maybe at times in our full forward line we had men in there who were outnumbered and that is something where we have to get more men forward more quickly.

“We hit quite a few wides too and sometimes our decision making left a bit to be desired, especially coming out of defence but overall we are very happy with the performance and the result and they are keen to push on and be better.”