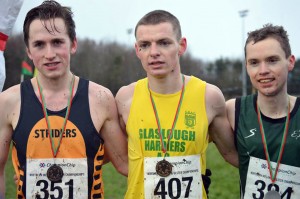 Among those were 22 Enniskillen Running Club (ERC) members who braved the bitter cold morning and icy conditions to take part. ERC sent four teams to these championships.

Given the wet conditions in the days leading up to the event the course had to be changed to run five laps of a challenging 1.5K track, for a total of 7.5k. In the true spirit of cross country this course was extremely wet, muddy and hard going from the start.

The crowning event was the men’s intermediates which featured some of the biggest names in Ulster cross country. The race was held over a gruelling seven lap 10.5k course that had been softened up by the hundreds of previous runners.

The ERC team was lead to the start by Conán McCaughey, who came into this event as one of the top favourites. McCaughey led the way for the first three laps before the top three runners broke away from the pack. These three included Glaslough Harrier Conor Duffy and former ERC athlete Stephen Prentice, now running for Annadale Striders.

As the men began the seventh and final lap, Duffy made his move and broke away with a surge. McCaughey did his best to stay with the Irish International and managed to put some distance between himself and Stephen Prentice. This was how the race finished with McCaughey taking an impressive second place in the championship.

The rest of the Enniskillen runners were also very impressive. Stephen Beacom and Ciaran Clancy each ran well to finish behind McCaughey. Paul Carron, and Tom Sheridan worked together and crossed the finish line within seconds of each other and Finbar Maguire, in his first venture in cross country, completed the field for Enniskillen.

In the first race of the day, the Masters, Eamonn Monaghan was the first man wearing the green, white and black vest of the Enniskillen club to cross the finish line. He completed the demanding run in 23rd place in an extremely competitive field. Second Enniskillen man in was Ciaran McSherry, who continues to impress. Richard Mason and Paul Somerville were next followed by Michael Walsh, Sean Carlin and John McDonnell. This masters team from Enniskillen took tenth place overall in the Championship.

The next two races were the women’s intermediates and masters, who ran the 4.5k race together. In the intermediates, Karen Dolan crossed the line first with an impressive 20th place finish. The next ERC women to finish the three lap course were Heather Williams and Linda Walsh, both proving their worth with a quality sixth place finish.

One of the most impressive performances in the championship was put in by Oonagh Fitzpatrick who was the first women home for Enniskillen in the masters. She ran a remarkably strong race to finish in 29th. Oonagh was closely followed by the next three Enniskillen runners Andrea Kennedy, Roisin McDonnell and Maria Magee to help ERC to 9th place.

The success of the Enniskillen Running Club on the day should bode well for the team as they play host to the next event on the cross country calendar. The Fermanagh Cross Country will take place Saturday 24th January at the Necarne Estate with the first race, the boys / girls under 13s, off at 11.45am.